DIY tips for French farmhouses: how to cover tiles 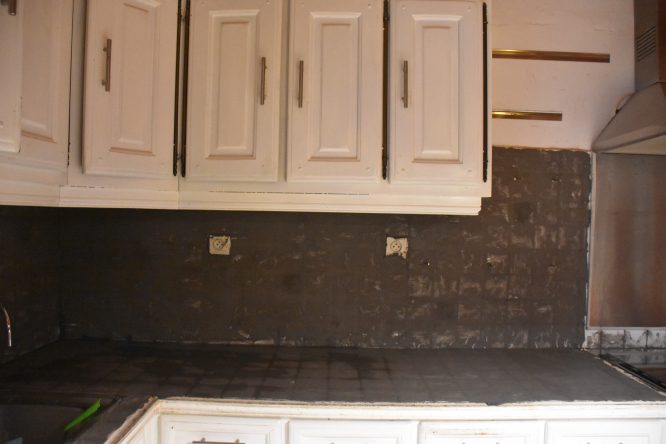 All renovation comes down to two opposing techniques: stripping back to reveal what is underneath and covering up what you don’t want to look at. DIY goes in fashions. One generation covers the banisters with hardboard and the next rips it out. I’m generally a revealer rather than concealer but there comes a time when you can no longer live with the previous owner’s taste in tiles.

Our kitchen units are of sturdy quality but the worktop was driving us mad. It was composed of small tiles separated by permanently grimy grouting, and the edge had a wooden gutter where liquids and dirt accumulated. It took 18 years to get around to doing something about it – as I didn’t know how to do anything better without spending lots of time and money. But then I was browsing in a DIY shop and there was this video playing, promoting the virtues of a product called béton minéral (mineral concrete), a cement powder in a variety of colours that covers everything and sets rock hard.

You paste it on, smooth it down, and then seal it with a resin. Quick and neat, eh? On the video, it looked simple. I watched it a few times and studied hard before I took the plunge. I followed the instructions and while the results were quite good, I would like to pass on some tips:

1: It is more messy and time-consuming than it appears on the video

You have to factor in the preparation time and have somewhere else to cook for a few days;

2: It is not that easy to get a smooth finish

On the video, the work is done by a professional plasterer. In practice, there are annoying lumps and holes. You can sand the stuff but it is hard to get perfect. As with all DIY, the basics are easy enough but the challenges of your specific project must be thought through;

3: It took a lot more gunk than advertised

On the outside of the plastic tub, the company claims the contents will cover Xm2. When you get to the small print on in­struc­tions inside, you realise you have been misled. A lot depends on the surface you start with. One pot did not cover my bright white patterned tiles in two perfect coats as it was supposed to. The first coat barely covered the joints.

More from the series: Tips for renovating roof timbers in a French farmhouse

In the end, I needed two tubs of the cement and two of a product which seals the worktop to make it watertight. The price for the job was exactly double what I had been led to believe it would be – and this stuff is not cheap.

The result is not bad. Better than the tiles, but it might have been cheaper and quicker to place a piece of prefab worktop over the whole thing. If there is a positive side to this story, it is more in the after- sales service.

I told the manufacturer, Résinence (resinence.uk for information in English) about the de facto price hike, by filling in one of those impersonal online forms that usually never get replied to. I got a warm email back from a man eager to know why things had not gone so well and what he could do about it. Could he send me a tub of mineral concrete? Nice gesture, but I had seen enough of the stuff. Still, if the price was reasonable, I would be tempted to use it again.

In the next edition: When DIY gets creative...