Joining a library in France: A free way to improve your French 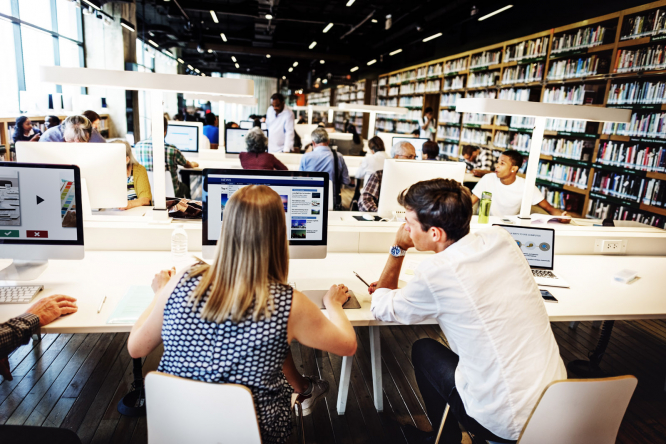 There are more than 16,000 public libraries in France, found in some of the smallest rural villages as well as in towns and big cities Pic: Rawpixel.com / Shutterstock

Online services are gradually extending the scope of public libraries from simply lending books, with some now providing language and hobby courses to members.

Access to these e-learning tools is often free (or otherwise very cheap) and subjects include French as a foreign language and hobbies such as photography.

Online services vary across the country, and some libraries still only offer the basics.

Anyone enrolled in a Dordogne library, however, has access to more than 111,000 digital books, including novels, comics and non-fiction; 13,000 films, some with English subtitles or in English with French subtitles; thousands of CDs, from classical through to pop and jazz; magazines and newspapers; and training courses, including school back-up lessons for children aged three- 19, and French as a foreign language in digital form with interactive exercises.

Members can watch four films, and read 15 magazines and 31 daily newspapers a month, with unlimited access to all other media.

The department’s network of libraries is free to join, including online services.

In Calvados, courses available include French as a foreign language, plus music, books and video games.

There are more than 16,000 public libraries in France, found in some of the smallest rural villages as well as in towns and big cities. They are run by local authorities, either at commune, municipal, departmental and occasionally regional level.

Usually you have to show an identity card and fill in a form to join. There may be a small annual sign-up fee, or it might be free, depending on the area.

In Toulouse, adults pay €17 to join, but it is free for children, over-65s and those on a low income. In Lyon, it is free to borrow books, but adults pay €18 a year to use the full content of online service.

Ministry of Culture figures show the number of library card-holders is going up. There were six million in 2019 and 6.2 million in 2020.

It is thought more people joined during the Covid-19 pandemic and subsequent confinements, attracted largely by the increase of online services on offer.