The 'living tapestry' from a small port town in France 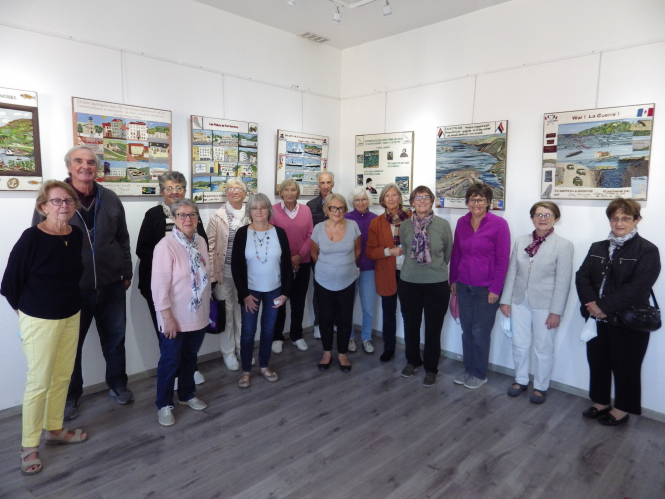 The group now hopes that once the mairie is able to put the tapestry on permanent display, members can continue embroidering to make items using details from the panels to sell to tourists to benefit the town
By Connexion journalist

A “living tapestry” that tells the history of a small port town has been created by a multinational team of volunteers and donated to the town’s mairie in the hope that it will become a tourist attraction.

It was the brainchild of Jane Forsyth, who retired to Port-Vendres, Pyrénées-Orientales, from the UK in 2007.

In 2015, she set up an association to produce a tapestry depicting her French home town, made up of 21 panels, each measuring 70cm square and depicting an individual period of history.

It was recently handed over to Port-Vendres in the hope that the mairie will find a home for it.

“One of the main economies of Port-Vendres was fishing but that has dwindled, so it is now relatively poor and depends on tourism and I wanted to give back something to the place I had come to love,” Mrs Forsyth said.

“I was inspired to make the tapestry when I visited a similar one in Aberdeen. We have such a rich history here, so there was plenty to base the tapestry on.”

Mrs Forsyth had done some embroidery before and persuaded a group of friends to set up an association with her.

It was more difficult to find help to embroider and at first there were only two of them to start on the arms of Port-Vendres. “At our first AGM, no one wanted to sew,” she said, “so I asked them back to my home to show them the first panel and to persuade them it was not difficult as we used a simple straight stitch.

'Eventually, we were 16, with a range of nationalities from France, Scotland, Ireland, England, Russia, the US and South Africa'

One member had never threaded a needle before and was thrilled to find a new skill.

“We sewed in our own homes, but also got together on about 200 Wednesday afternoons in all, for shared conversation, embroidery and tea.”

The finished tapestries illustrate scenes spanning time from prehistoric volcanoes, the possible journey of Hannibal over the Pyrenees, atrocities wrought by the Nazis as they left the town at the end of World War Two up to the modern port.

They were designed by Mrs Forsyth after she was unable to find an artist prepared to do so without charging a fee that was beyond the group’s means.

The tapestries were put on show in a successful exhibition in the autumn.

The group now hopes that once the mairie is able to put the tapestry on permanent display, members can continue embroidering to make cushion covers and other items using details from the panels to sell to tourists to benefit the town.

They would also like to attract new young embroiderers to develop the project as its history evolves.

The Connexion regularly features news and events from community groups all over France. We would be pleased to publicise your association (noncommercial) – it’s a great way to bring in new members and it is free! To have your association/group featured email details to news@connexionfrance.com

Aveyron is home to the world’s biggest bagpipe collection