Aveyron is home to the world’s biggest bagpipe collection 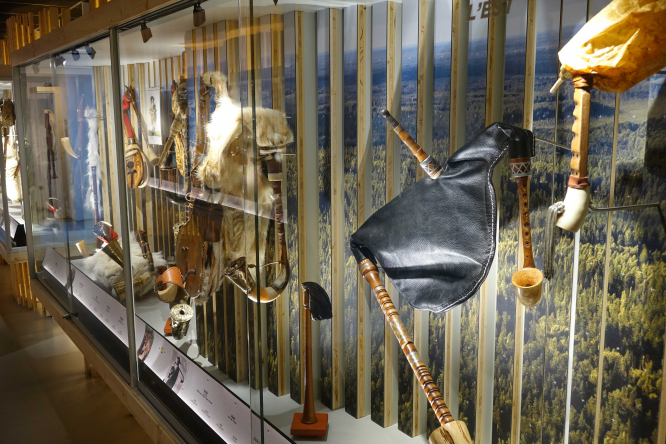 The biggest collection of bagpipes in the world is not in Scotland, but in the country village of Cantoin, Aveyron at Maison de la Cabrette.

Jean-Louis Claveyrole is curator, and plays and makes these traditional instruments:

“They are an important part of local culture. First they were called the Musette, and were used to accompany the popular dances of the late 19th century, the bal de la musette, which became bal musette when the accordion, introduced by Italian immigrants took over.

“The musette was later called the cabrette locally, as the animal skin used to make the bag was goat, cabra in Occitan.”

The first project at Cantoin was to create a display of local traditional instruments. Once this was completed, the idea developed to show examples from further afield:

“The cornemuse – as it is called in French – is played all over Europe and Asia Minor, from Sweden to India. The Scottish bagpipes are the most well known, largely to the fact they are something of a national emblem in Scotland and also due to colonisation when they were taken up in other countries.

“When we were looking for an Indian version of the instrument it was difficult to find, because it had been largely replaced by bagpipes.

“France is the country with the most varieties. There are fifteen, each from a different region and each with their own unique form and sound such as the biniou from Brittany and the boha from the Landes.”

“The instrument itself dates from at least as far back as the Romans and is probably older,” says Mr Claveyrole. “The aim was to produce a continuous sound, uninterrupted by the player’s breathing, using a reservoir of air made out of animal skin. Goat and sheep was used, but also dog, wolf and fox because these skins are non porous.

“Now we use gore-tex, better for musicians as leather pouches often developed mould which could kill the player when he breathed in the spores.”

It took twenty years to complete the collection: “Some countries, like Russia, were reluctant to let us export their culture. In Germany it was difficult to track down an original instrument as Hitler had most of them destroyed.”

Each one has its own tale: “We have a gaïta from Spain with a yellow dress and pipes wrapped in snakeskin. The owner played the bagpipes at three-day-long weddings. During one he was told his seven-year-old daughter had died from a snake bite, but he could not go home until the festivities were over. When he did he made his daughter’s dress and snake part of his instrument so she could always be with him.”

Not open every day.

British violinist’s concerts a thanks for French cancer care

7 hours ago
4
French farmhouse renovation: DIY tricks to get rid of rats