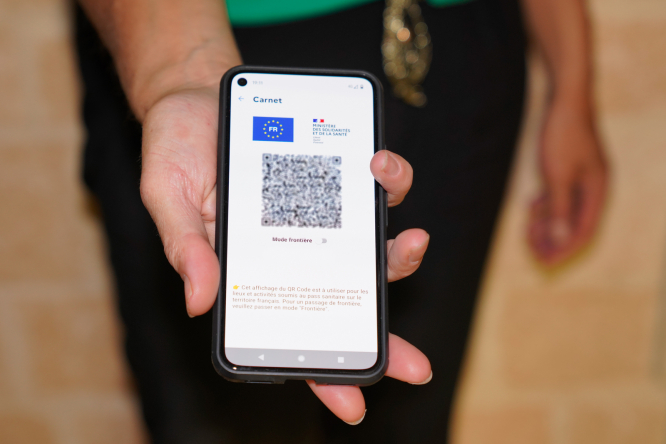 We look at the French Health pass, what it includes and the opinions from those with teens Pic: sylv1rob1 / Shutterstock

What is the health pass?

As with adult passes, the document is either proof of being fully vaccinated against Covid, a negative test taken within the past 72 hours, or a positive Covid test taken between 11 days and six months before (this shows you have immunity).

It is required from 12 years and two months, rather than simply 12, to give children time to get vaccinated after their 12th birthday. Vaccinations are not yet available to children under this age, but have been possible above 12 years since June 15.

How can my child be vaccinated?

Children are given either Pfizer or Moderna vaccinations, the two authorised for use on under-18s by the European Medicines Agency.

Parental authority is required from one parent only for 12 to 15-year-olds, though both can give approval. You can find the form at tinyurl.com/2fmuxpu2.

Sixteen-year-olds can be vaccinated without parental consent. However, they will have to show their carte Vitale, if they have one, and the carte Vitale or attestation de droits showing the social security number of the parents on whom their card depends.

Where can my child be vaccinated?

Education Minister Jean-Michel Blanquer has promised all collèges and lycées will be able to offer vaccination slots to pupils by October. At the beginning of term, this was possible in 1,300 out of 10,700 schools. Mr Blanquer said it was taking time to organise.

For the majority of students, injections have been organised by reserving slots in a vaccination centre, while others have benefited from temporary centres nearby.

In the Côte-d’Or, for example, regional health agencies have chartered a so-called vaccinobus, to serve 28 collèges (out of 54) in the department, both in towns and in rural areas.

What impact has the new rule had?

However, even before it officially came into force in October, the health pass requirement was having an effect on numbers signing up to sports clubs. So much so that the president of the French Olympic Committee, Brigitte Henriques, asked the government to postpone its introduction until October 31.

“Certain sports federations say they have already lost 25% of their young members and we know parents are not signing up their children, particularly in areas where it is difficult to get vaccinated, often in disadvantaged urban areas.

“As nearly 70% in this age category had their first vaccinations by September, another month would have given the chance for the greatest possible number of youngsters to be vaccinated,” she said.

Parents who got in touch with The Connexion via Facebook said their children had opted for vaccination, with no problems.

Jonathan Hesford, who writes The Connexion’s wine column, said both his daughters, aged 20 and 17, are double-vaccinated. However, although he supports vaccination, he does not think under-18s should need a health pass to socialise.

“I think it is asking too much of the younger generation, who have suffered the most from the pandemic. Last year at lycée was a disaster for my daughter, with half classes and Zoom calls and no social life at a time when it is so important for teenagers to mix with their peers.

“I know of many teenage girls who have had mental health issues. Now there is an additional burden on them to make a decision over vaccination, which can lead to segregation between those who have and do not have the pass.”

Does the rule keep schools open?

Currently, schools are under the level 2 health protocol, meaning class closure for seven days if there is one positive Covid case. Children who test positive have to quarantine for 10 days.

Non-vaccinated pupils in lycée and collège classes have to stay at home for seven days.

There is help, however, for working parents forced to stay home to look after children under 16 if a class is closed or they test positive, including claiming chômage partiel (partial unemployment benefit) or indemnités journalières dérogatoires, a daily allowance to compensate time off work.

Will under-12s need a health pass?

At present, there are no plans to vaccinate younger children, though Pfizer-BioNTech says it will be asking for authorisation for use on five to 11-year-olds following results from trials. The company says it is “safe, well tolerated and showed robust neutralising antibody responses”. It added that Covid cases in children had risen by around 240% in the US since July, showing the need for vaccination.

Results of trials on under-fives are expected later this year.

Artisan soap maker: 'After six years, it still gives me a thrill’
22 October 2021
More from Family
More from Connexion
Get news, views and information from France
Join the newsletter
Subscribe to The Connexion