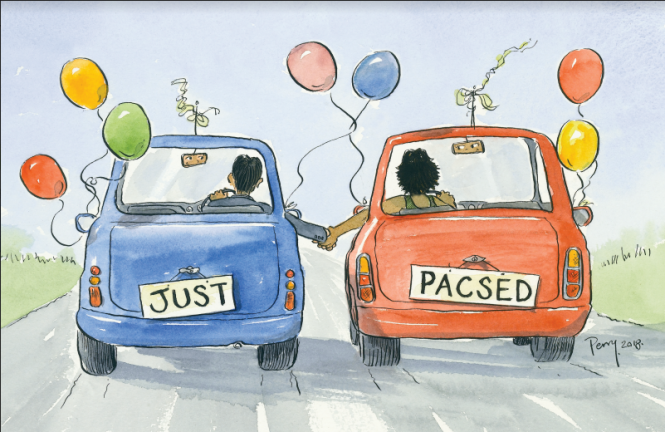 The Pacte Civil de Solidarité (Pacs) is 20 years old and continues to grow in popularity as an alternative to marriage.

It was originally aimed at same-sex couples and was then opened to all in 2013.

A Pacs suits couples wanting legal recognition but fewer obligations. It is simpler and cheaper to enter into and each partner is free to break it without giving a reason.

In the latter case, no financial compensation is due unless previously agreed.

While it is sometimes possible to obtain legal compensation for breaking the Pacs in an “abusive” way – for example, if one partner throws the other out with no warning – there is no legal expectation of fidelity, as there is in marriage.

Just like in a marriage, the couple should live together and give mutual support (in financial terms, this is for each in proportion to means, unless otherwise specified). They share responsibility only for debts related to daily life, and not if they are “excessive”.

A Pacs between a foreigner and a French person might help the former obtain a residency card but, unlike marriage, it does not provide a fast-track to nationality.

Some Britons in France choose to become Pacsed because the partner benefits from the same exemption from inheritance tax as a spouse, as opposed to 60% between couples living together in an informal relationship.

However, unlike a marriage, a Pacs partner does not automatically inherit, so it is vital to make a will. He or she does benefit from some rights to stay in the family home in the case of death, but they are more
limited than in marriage.

Other differences include the fact that a Pacs couple cannot jointly adopt a child, a Pacs partner cannot claim part of a deceased’s partner’s pension (pension de réversion) and does not qualify for the allocation de veuvage widow/er’s benefit.

As with a married couple, a Pacs couple make a joint tax declaration and they have similar social security and healthcare rights.

Unlike a wedding, this is often without a formal ceremony and speech from the mayor, though some mairies do offer this as an option. There is no need for witnesses and the partners retain their surnames. As with a marriage, people have the right to four paid days off work.

Most people mark the occasion in some way, ranging from sharing a glass of champagne to a romantic meal, a party or a weekend away, but there are fewer set traditions involved.

As an alternative to the mairie, you can also sign the convention de Pacs document at a notaire’s office at a cost of around €400 (it is free at the mairie). This is also a chance to obtain help with drafting a contract about how property will be owned by the couple.

The notaire will maintain a record of the Pacs.

Only the couple keep copies of a Pacs signed at the mairie, though the mairie notifies relevant authorities. If a couple wish to break a Pacs, this can also be done without charge at the mairie.

Franco-British honorary avocat (and retired English solicitor) Gerard Barron from Bou­logne-sur-Mer said that while a Pacs is relatively simple, you should not take one out in haste.

Give thought to current and future assets, debts and earnings and how the members of the couple intend to fund household expenses.

He said it is best to enter into a specific agreement on these points and obtain advice from a notaire or avocat.

“Untying the knot may seem simple legally but if there is no agreement on finances, assets and even pensions, these matters will quickly become a nightmare,” he said.

He added that from an English legal point of view, such an agreement should be respected by a UK court unless it considers the arrangements unfair.

It should, however, be noted that the UK does not officially recognise a French opposite-sex Pacs, though this may change (see January’s edition, page 18, or search “Pacs” on our website). The standard convention de Pacs can be extremely simple but it can also be made more complex.

If not otherwise specified, the default regime for the couple is séparation de biens, meaning each maintains separate ownership of items they bring into the relationship, or own other property in proportion to what they paid for it.

The main other choice is indivision, where property acquired during the Pacs – but not money incomes – is owned jointly. Unlike marriage, there is no option for universal community, where a couple may agree that all or part of their possessions are jointly owned, whenever acquired.

This means also that a Pacs couple cannot use this strategy to protect a survivor’s right to inherit the family home in full, against children’s rights.

The list of documents needed for a non-French person includes: a birth certificate and a sworn translation, passport or carte de séjour, certificate of custom proving that you are single and in full legal capacity to enter into a civil partnership (obtain one from the UK government at tinyurl.com/c6phvsg) and a non-Pacs certificate (apply to the Foreign Affairs Ministry via form Cerfa no.12819*05 – see its notes section for the address – or see this link for email applications: service-public.fr/particuliers/vosdroits/R51271).

If you have lived in France for more than a year, you will also need an attestation de non-inscription au répertoire civil, proving that you are not listed as being under a power of attorney, from the Service central d’état civil (you can request this via email at pacs.scec@diplomatie.gouv.fr).