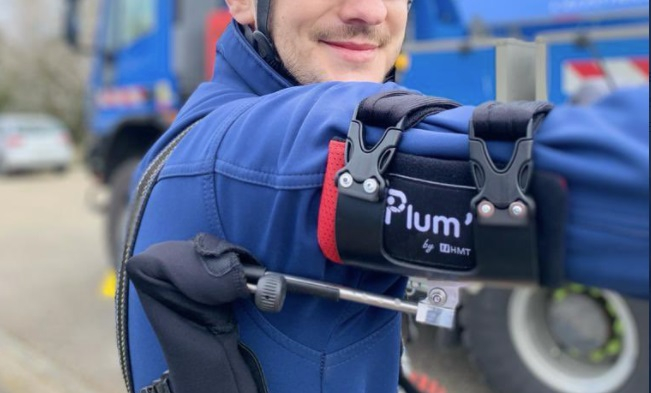 The exoskeleton made by HMT in Tarbes helps to support workers in physical professions Pic: Enedis Aquitaine N / @enedis_aqui_N / Twitter

An award-winning French start-up is developing exoskeletons to help support people who work in physical professions, in a bid to help ease neck, shoulder, elbow, and arm pain.

HMT, based in Tarbes in Hautes-Pyrénées, was started in 2017 by six alumni of the town’s engineering school. In 2018, the company won first prize in the health and safety category of a national competition organised by electricity company Enedis.

The start-up is the only company of its kind producing exoskeletons in France. For the past two years, it has been testing its exoskeleton technology on Enedis technicians in the Hautes-Pyrénées.

As part of their job, the workers are often required to carry weights of more than 10 kilograms with poles of up to two metres long, under power lines. The exoskeletons help support the workers’ shoulder and arm movements, to provide relief for the neck.

Philippe Berardo, area director of Enedis Hautes-Pyrénées, told FranceInfo: “These exoskeletons offer support for weights held at the end of their arms. This helps prevent and avoid musculoskeletal problems [later].”

HMT now produces up to 300 exoskeletons per year, and is continuing to use them to support workers in physical professions.

Kevin Regi, general president director of HMT, said: “Today we are working across almost all industries of France, including in energy, farming, and construction.”

5 hours ago
5
How will France’s health pass work in cafes, bars and restaurants?

Tax refunds due for 13 million French households
30 July 2021
More from Health
More from Connexion
Get news, views and information from France
Join the newsletter
Subscribe to The Connexion