Abandoned French chateau to be sold by auction - starting at €90,000 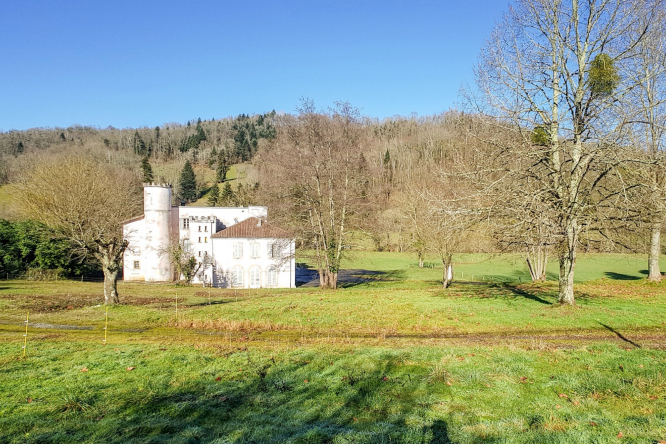 Once a mainstay of French culture and society, holiday colonies have fallen out of favour compared to their heyday in the early 1960s, when four million French children experienced them Pic: Agorastore

An abandoned chateau that formerly accommodated tens of thousands of Parisian schoolchildren is going under the hammer as interest in holiday camps wanes.

The Château de Nescus, not far from the Spanish border in Ariège, has a starting price of €90,000.

The building comprises 1,200m² of living space over four floors, on 2.2 hectares of land with a stream running through it.

As well as the bastide building, there is a caretaker’s cottage with around 100m² of living space, sharing a wall with the main chateau.

It has been put up for auction on the site Agorastore, which specialises in selling buildings, vehicles and computers for local authorities.

Owned by the City of Paris, the chateau was damaged after authorities decided to shut it – vandals broke in and covered most of the walls with graffiti.

Because of this, as well as necessary renovation work to remove asbestos, replace door and window frames, put in new drainage and redo the electricity, Paris town hall is requiring people to visit the chateau before making bids.

The chateau, built around 1700 for local nobles and then rebuilt after a 1918 fire, served as a holiday colony for Parisian children after World War Two.

Once a mainstay of French culture and society, holiday colonies have fallen out of favour compared to their heyday in the early 1960s, when four million French children experienced them.

Figures from 2019, from statistics agency Ifop, show that these days 1.4million children aged between seven and 12 go to holiday colonies, a quarter of the age group.

The survey, which interviewed both parents and children, found adults were less keen on the colos than their children, who generally relished the communal living aspect and opportunities to take part in activities and make new friends.

Some 93% of the youngsters said they had a good time, and 53% said they would love to go away again.

Research into families’ social backgrounds found most parents sending their children to holiday colonies now are well-off, whereas in the past there was a greater social mix.

Christian Dominé, president of Jeunesse au Plein Air (JPA), the largest group of holiday colony associations in France, which ordered the Ifop survey, said: “Most important is that parents have more time off themselves, and so children are more likely to go with them for longer family holidays.”

A week in a colo costs on average €550 for seven days, so price is a factor, although there are many ways this is reduced through grants and subsidies.

“But there was also the fact that rural holiday colonies – like the chateau up for auction – went out of fashion, although that has changed and hiking and other activities are now increasing in popularity again,” said Mr Dominé.

“Unfortunately, decisions taken during the downturn to sell buildings in rural areas are now coming into effect.”

The JPA is working to try to ensure other unwanted holiday colony buildings are maintained and, hopefully, find new buyers or tenants who will keep them as holiday villages.

It aims to increase the number of children going to colos to two million in three years.

The government has been asked if its budget to help children get away (€180million this year) can be made annual, which would help parents and associations plan better.

“The colos are an essential tool for teaching communal living,” said Mr Dominé.

“So when I hear of former colo buildings being put up for sale, my initial reaction is always ‘what a shame’.”

The auction of the Château de Nescus is online between September 14 and 16.