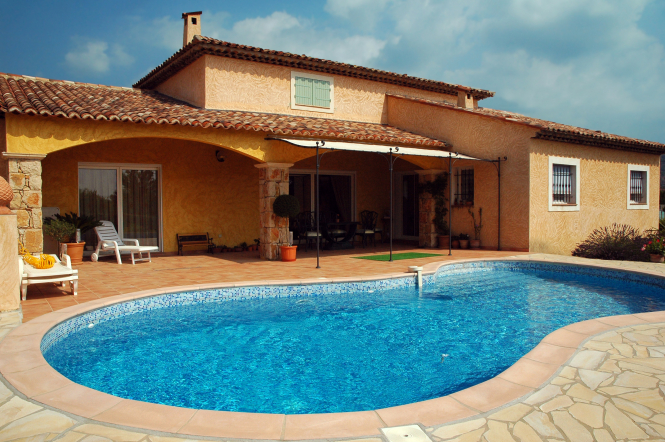 The tax office is cracking down on undeclared swimming pools Pic: Alfgar / Shutterstock

August, traditionally the quietest month in the French property year, saw a slight drop in activity compared to the fizzing market of the first seven months.

Overall prices of non-new-build houses continued to rise throughout the country. Rural areas saw a 0.5% rise according to Meilleurs Agents–Les Echos, which has established itself as the best ‘instant’ index of the market.

This means that rural properties are now close to reaching the same prices as at the start of 2008 when the last financial crash saw prices fall by as much as 30% in some areas.

A survey by broker Empruntis showed that competition between banks was keeping loan rates low this year, even in the summer.

Normally French banks put up their rates in the summer when their property specialists go on holiday, in order to reduce demand to a level which less experienced staff can handle, but this year the rates remained low. The average for a 20-year loan is quoted as 1.1%.

In search of a property bargain? Try a French chateau

One part of the market where bargains are to be had for people willing to take a risk is that of old chateaux, some of which were formerly used as children’s holiday colonies.

For example a chateau belonging to Belfort town council and not far out of town is on sale by auction with a starting price of €277,950 this month. It had previously been on sale for €900,000 before frozen water pipes led to a damaging flood.

Buy a piece of history

If you have deep pockets you might like to put in an offer for Marseille’s oldest building, currently on sale via LeBonCoin for €1.2million.

Situated near the Old Port, it is a four-storey hôtel particulier (townhouse), with 223m2 of floorspace.

Built around 1535 it is now said to be the oldest building in the city, however it is in serious need of refurbishment.

A couple found their dream home was riddled with dry rot (la mérule in French) after they moved in, and after qualified workers had been working on the house for a year without mentioning it.

Fabrice Louge and his partner Veronique set up a website complete with graphic photos of the damage caused by the rot as a warning to other buyers.

Buyers of property in France should make sure a check for dry rot is carried out when looking at any building you think might have damp.

Have you declared your swimming pool?

If you have a swimming pool which has not been declared to the tax authorities, you might be in for the fiscal equivalent of an icy dunk in the next couple of years.

French tax inspectors are starting to work with Google to use aerial photos to check for undeclared pools, garden huts and conservatories, all of which can lead to taxe foncière increases.

A trial run over the town of Marmande in 2017 found a third of the 800 swimming pools in the town had not been declared.

It is a case of a poacher being a gamekeeper – Google paid nearly €1billion in 2019 to French tax authorities to end a case dating from 2015, when it was accused of hiding revenues which should have been taxed in France.

The current Pinel scheme, which offers tax reductions for those investing in new-build property is set to become less advantageous in 2023 and to disappear from the end of 2024 – however the good news is it is being replaced.

From 2023 a so-called ‘Super-Pinel’ scheme is announced, with a tax reduction of up to 21% of the value of a new property.

To be eligible, buildings will have to meet high energy-efficiency standards and owners will also have to promise not to reduce the quality of the accommodation offered to tenants in future, such as by reducing the size of bedrooms, ceiling height or access to natural light.

It is important to be aware of the potential pitfalls of swapping the tax status of main residences and second homes within France.

This is more relevant now as many people contemplate how to relocate out of cities to rural areas - a trend said to be fuelled by the Covid confinement periods.

Solar panels which allow sellers to sell any surplus electricity they do not use are now the most popular form of domestic solar installation in France, with 100,000 of the 120,000 home systems registered since 2017 now under the scheme.

Homeowners are now able to sell surplus electricity at 10 centimes per Kwh.

Prices of DIY kits have also tumbled and can be had for as little as €5,000 for a standard installation, including help with the paperwork.

More on property in France