Huge French château with water damage to be auctioned at €278,000 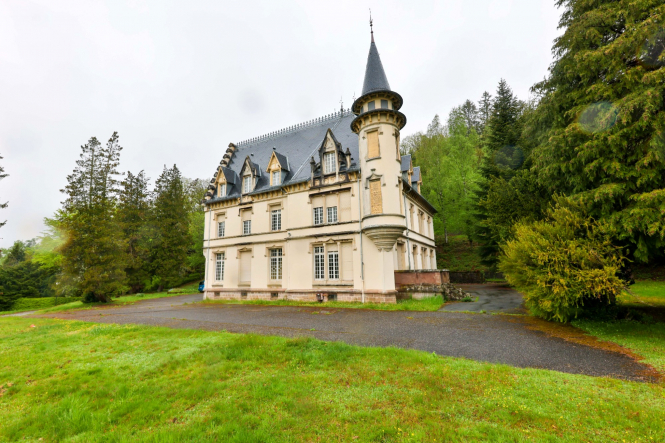 The Château Léguillon was built in 1900 and is now up for auction at a discount rate due to water damage Pic: Agorastore.fr

A neo-gothic château with over 900 square metres of floor space is up for auction at a bargain starting price of €277,950, after frozen water pipes caused a flood. However, it comes with a repair bill of just over €223,000 for the municipality that owns it.

The Château Léguillon, built in 1900 around 15km from Belfort (Bourgogne-Franche-Comté), was used as a holiday centre for children (colonies de vacances) from 1947 to 2014, when a new mayor decided the €300,000-a-year running costs were too much.

The château, which boasts two upper floors, a cellar and 2.4 hectares of garden running across the boundary of two communes, was then put on the market, but a buyer could not be found.

Then disaster struck in the winter of 2018, when frozen pipes on upstairs floors burst and led to floods pouring down stairs and through much of the building.

Why it happened is a mystery – the boiler in the basement was set in its anti-frost position, which should have provided minimum heating to protect the building.

The damage led to the asking price being halved and in 2019, a local business, which saw an opportunity to transform the château into gites, almost bought it before the deal fell through.

Now the auction site Agorastore.fr which sells properties, cars and other equipment put on sale by government agencies, has been charged with finding a buyer.

All bidders have to visit the château to see it first, although from the pictures the water damage does not seem too bad, with some mould and wallpaper coming off.

“In a building like this, it is really necessary for the buyer to have had a good look around before making a bid,” a spokesman for Agorastore.fr told The Connexion.

“Some people will look at the damage and think it is not too bad, while others will be horrified.”

Attached to the site is the six-page quote (devis), prepared by surveyors for the city of Belfort, with the bill before tax to repair the water damage, at €223,438.

As well as decorative work, the devis includes much electrical work and even the repair of floors.

The description on the sale site, notes that “the buyer will face a lot of work due to grave water damage.”

“All sorts of projects involving housing people are likely to be warmly received by the communes, be they for chambres d’hotes, gites, or a family home,”  the spokesman for Agorastore said.

“Other projects will also be looked at, but buyers must remember the château is in the regional natural park of Ballons des Voges, so the project will have to fit in with the guidelines designed to protect the region.”

It could be a good time for the château to be put on sale, as estate agents specialising in the sale of châteaux are reporting record interest and sales, which started from the first lockdown period.

They say buyers are divided between those who are looking for a family home and those who see the opportunity to buy a château as part of a work project, with plans for everything from hotels to art galleries.

Most in demand are properties within an hour of urban centres with good transport links to Paris, and broadband internet connections.

Belfort is just 25kms from the city of Basel in Switzerland, which has an international airport, and is on the A36 autoroute, and on the high-speed Rhin-Rhone train line, with a TGV station outside the town centre.

For more details on the Château Léguillon auction, see Agorastore’s website at this link.