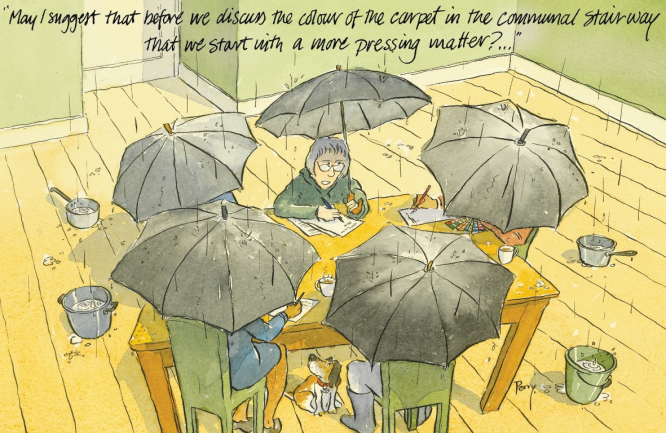 Almost all buildings divided into flats (or ensembles of blocks on one site, called a résidence) are copropriétés, although there are a few exceptions. Rules covering them are laid out in a 1965 law
By Connexion journalist

Copropriété  is a legal regime under which a building divided into several flats is owned jointly by the individual flat-owners.

Not surprisingly, most are in cities but they also exist in, for example, ski resorts.

Almost all buildings divided into flats (or ensembles of blocks on one site, called a résidence) are copropriétés, although there are a few exceptions. Rules covering them are laid out in a 1965 law.

Together, these are referred to as the owner’s lot (share). This is allocated a number identifying it, which will be stated in the flat’s deeds, as well as a figure called tantième (tenth) or millième (thousandth), referring to its size as a proportion of the whole copropriété.

For example, if an owner has 300 millièmes, they own 30% of it, which for some decisions gives their vote a corresponding weight at annual general meetings. It also means they will pay 30% of the charges for the communal areas.

The most important obligation of a copropriétaire is to pay these charges, which are usually billed on a quarterly basis.

The charges pay for cleaners and gardeners, a caretaker, if relevant, and often collective water and heating services. They also include approved repairs or improvements.

If you fail to pay, you will receive a warning letter from the syndic (see below), which will begin legal proceedings if you do not settle up.

The rules covering a specific copropriété are in a weighty document, the règlement de copropriété

When you buy a flat, you are given a copy. It is drawn up by a notaire when the copropriété is created and a copy is kept at the land registry. The règlement includes rules relating to using the communal areas, which you are asked to respect.

It may include, for example, clauses which restrict the right to run a business, or certain kinds of business (a clause of habitation bourgeoise exclusive bans all work activity). It may also stipulate that you cannot do DIY outside certain hours.

Aside from the formal rules in the règlement, living in a copropriété brings a general expectation of savoir-vivre – being considerate with regard to noise, not leaving bulky items in communal areas without asking neighbours, not throwing cigarette butts off your balcony or bothering neighbours with barbecue smoke.

If a parking space comes with your flat, you should use it and not park in a space belonging to someone else. If there is a lift, you should also avoid blocking it for too long or using it to carry up heavy materials exceeding the allowed weight.

There are several similar sounding bodies related to the running of a copropriété.

The syndicat des copropriétaires is a technical term for all of the owners, who hold an annual meeting called the assemblée générale (or AG) des copropriétaires. It has its own legal status, similar to a company, and takes decisions related to the building’s management.

The syndic is an organisation, in most cases a commercial firm, managing the day-to-day running of the communal areas, cleaning, maintenance, and emptying of bins.

It acts on decisions taken at the AG and sends quarterly appels de fonds charges bills.

The conseil syndical – elected from owners at the AG – assists the syndic and checks it is doing its job properly.

The AG des copropriétaires meets to vote on the accounts of the previous year, whether or not to maintain the syndic or choose a new one, the coming year’s budget, any new repair or improvement work on communal areas, and to set aside money for a fonds de travaux.

The latter is an obligatory fund that flat-owners must pay into as part of their charges since 2017, set aside to help pay for important work that becomes necessary in the future. The aim is to avoid unexpected big bills all at once.

The syndic sends out an agenda and invitation to all the copropriétaires to the AG, and takes part in it.

Where a flat-owner wants to carry out work that will affect communal areas or the building’s appearance, they should tell the syndic so it is put on the agenda, as a vote to approve it may be required.

The AG may also vote on any necessary modifications to the règlement, for example due to new laws. Changes need to be registered with the land registry.

It will be held in a convenient location suitable to the size of the flats, such as a conference room in a local hotel. Current rules also allow videoconferencing until April, likely to be most relevant to smaller copropriétés.

If you live in a flat, it is recommended you read the agenda and go if possible. Decisions may be taken affecting your charges for years to come.

You may designate a neighbour as your proxy if you cannot attend. Tell them if there are certain agenda items that are important to you and how you want to vote.

It is possible to have a 'voluntary' syndic, rather than a professional one – this is most often found in small copropriétés with only a few flats

In this case, one of the owners has to agree to take this role.

They are elected by the owners at an AGM, in the same way as a professional syndic. If none exists, any owner can call a meeting to designate one.

Very small copropriétés, with no more than five lots or with a budget under €15,000, do not have to wait for the AGM to take decisions, but can simply agree among themselves, giving permission in writing.

Each copropriété has to be registered in a national register run by the Anah housing advice body. Its entry includes key facts about the property and is used by the syndic as the basis for an annually updated fiche synthétique fact sheet, which flat owners may ask to consult.

Our main image was drawn for Connexion by artist Perry Taylor. For more of his work see www.perrytaylor.fr

House prices are rising faster in France than apartments