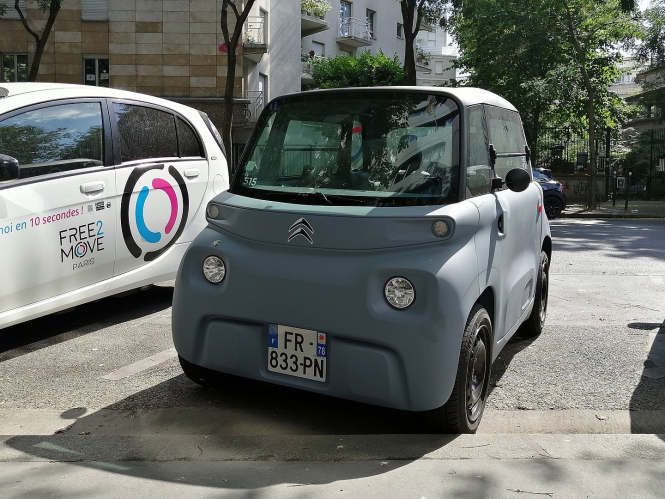 Citroën's new licence-free electric car is about to take to the streets of US capital Washington DC.

Free2Move is the American car-sharing subsidiary of vehicle manufacturer Stellantis (created after a recent merger of Fiat-Chrysler and PSA) which makes the innovative electric vehicle.

It recently teased the launch of the vehicle to its fleet on social media.

Parisian users of the car-sharing app Free2Move will be used to the Citroën AMI, as it makes up 100 vehicles in the firm's 500-strong fleet in the capital.

But the vehicle's unique look will surely come as a shock to service users in Washington DC, who so far have been driving larger and more traditional Chevrolet Equinoxe or Cruze cars.

There is no mistaking the profile of the Citroën AMI in the image. The small, 100% electric, licence-free vehicle - officially it's not a car but a motorised quadricycle -  has been a success since it was launched in France last year, where it can be driven from the age of 14.

Read more: The licence-free cars you can drive from age 14 in France

Stellantis said that five AMIs will be available to customers in Washington, the second city after Paris to host the vehicle on its streets.

“We will soon be testing AMI with the users of our car-sharing service in Washington in order to gauge the appetite of the American market for this 100% electric urban mobility solution,” a spokesperson for Free2Move added.

If successful, they may soon appear on the streets of Madrid and Lisbon, too - where Free2Move also operates - and Portland, Oregon, where it is about to launch.

G’day Sheila could have been b’jour Bruce
16 August 2019
More from Transport
More from Connexion
Get news, views and information from France
Join the newsletter
Subscribe to The Connexion