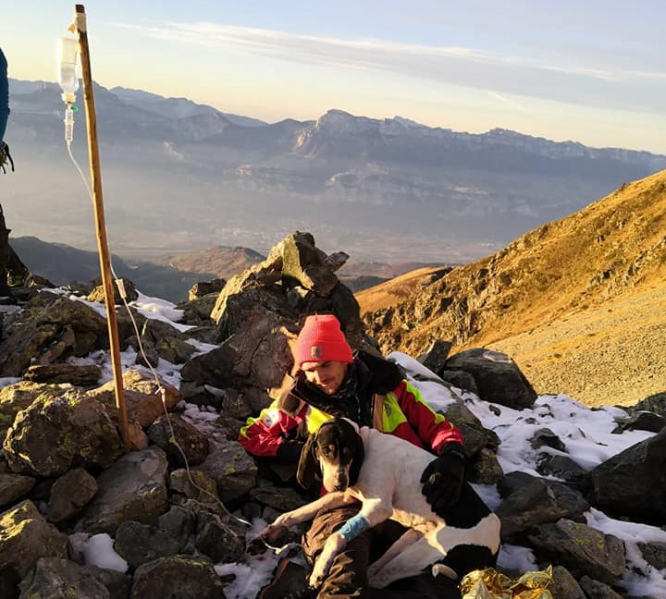 The service is free, but the charity welcomes a donation from owners as they have no other form of funding to buy equipment
By Connexion journalist

France has the first charity in the world devoted to rescuing animals in danger on the mountains.

The Equipe de Secours Animalier en Montagne, created in 2019, covers most of the Alps in the departments of Isère, Savoie and Haute Savoie, and hopes to launch branches in the Hautes-Alpes, Drôme and Jura.

From its base in Grenoble, the group co-ordinates a team of 34 rescuers, including a vet, firemen and gendarmes, who share a variety of mountaineering skills, including rock climbing and potholing.

It mainly rescues dogs, but also goats and sheep which have gone astray and are impossible to reach for anyone who is not an experienced mountaineer.

President Arnaud Lemagny said they thought they would be called out just a few times a year when they started but so far have rescued 38 animals.

“We knew there was a need, because we had heard of cases where a dog might have gone astray and died because no one could reach it but did not realise there would be so many.

“The Isère gendarmes got in touch and said they would be grateful if they could pass any calls concerning animals on to us, and so we have discovered there is a real role for our association, to intervene when the public services cannot do so.

“Over the winter, we are often called out to rescue hunting dogs. They often have GPS monitors so the hunter will know where they are but find it impossible to reach a dog which is perhaps stuck high up in a crevice. In the summer, curious dogs out on a walk with their owner will sometimes get stuck, or during the first snows they might slip on the icy ground.

“Often, a dog will chase a wild animal and then find it cannot get back down, or a large dog might be injured or fall ill and the owner cannot physically carry it home or to their car.

“Farmers might also call us because one of their animals is stuck somewhere on the mountains.

“We usually manage to save the animal but sometimes there is the sadder side when it has died after a bad fall.”

Rescues are not for the faint-hearted, often requiring expert knowledge to get up or down to a cliff-edge location.

First, the team has to study the area: “We look at detailed maps and might ring the local public rescue services for information to decide the best approach and the equipment we need.

“Often, the call comes late in the afternoon, with only a short time before dark and then we cannot go until the next day.

'None of us sleep well on nights before a mission, because we hate to think of the animal suffering out there on the mountain'

Sometimes, they use drones to find an exact position. They take climbing gear and one of their members is a vet who can use a dart rifle to sedate an animal that is too scared to be approached. “Sometimes, the only way to reach the animal is by helicopter.

“So far, this has only been necessary twice. It can be very spectacular. Once there were three dogs stuck in such a tricky position, it was the only option.

“They were attached to cords and had a 30-40-second ride dangling in the air as they were transported down the mountain.”

They were alerted to another rescue by an officer from the Parc National des Ecrins to save a sheep stuck on a rocky ledge for five days. Three of the team climbed down to the ledge, secured the sheep in a harness and then lowered it down, safe and sound.

The owners are always extremely grateful. The service is free, but the charity welcomes a donation from owners as they have no other form of funding to buy equipment.

Owners have to pay if a helicopter is called in but are warned in advance.

The team always feels a great sense of achievement when a rescue has gone well. “We combine our two passions for the mountains and animals,” said Mr Lemagny.