French photographers are winners when it comes to capturing nature 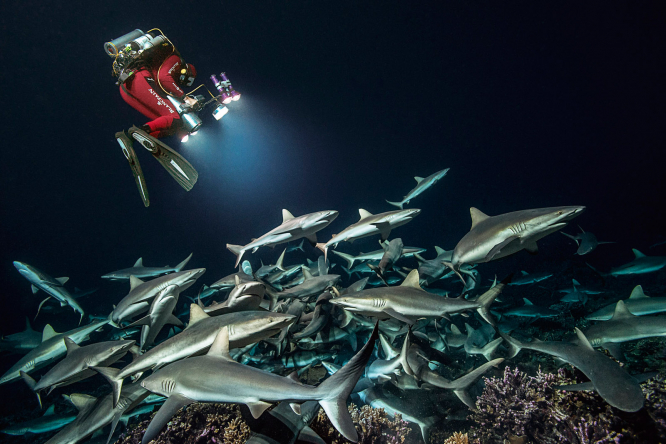 A Frenchman has won the prestigious title of Wildlife Photographer of the Year for the first time in the annual contest run by the Natural History Museum and the BBC.

The winning picture by underwater photographer, deep sea diver and biologist Laurent Ballesta was selected from more than 50,000 entries from 95 countries.

It captures the moment when grouper fish lay their eggs to be fertalised in a cloud of sperm in Fakarava, French Polynesia – an event that happens for a period of 30 minutes only once a year.

“What attracts me to a subject is its mystery,” said Mr Ballesta.

“I had heard a rumour this happened and wanted to investigate. It took five trips, once a year, to be there at just the right moment.

“There were dangerous currents, and shoals of sharks. To be sure, I stayed underwater for 24 hours. This would normally mean 20 hours getting back to the surface for decompression, but with my colleagues we experimented to reduce that to two hours.”

This win, however, is particularly important to him.

'To think they would let a French frog win this title!'

“For nature photography, this is the most prestigious competition, the reference for wildlife photography. To think they would let a French frog win this title!” There are only 100 winning photographs, and another from France this year was by 15-year-old Emelin Dupieux, whose picture of an Apollo butterfly resting on a daisy was highly commended.

“Every Christmas for the past six years, I have been given the Wildlife Photographer of the Year book showing the winning photographs and it was my dream to be a winner myself,” he said.

He has been taking photographs since his father gave him his first camera, and especially loves birds.

“First, I spend time looking for their tracks. Then I set up a hide and wait.”

Sometimes, as with his winning photograph, the perfect shot comes down to chance: “We were on holiday in the Jura. On the first evening, we went into a meadow and found the butterflies. Because it was late, they were resting and I took several photos from different angles.

“The light conditions meant I could capture the dark background contrasting with the daisies and butterfly.”

He hopes to make wildlife photography a career, and to ultimately explore the south and north poles.

Entries for the next Wildlife Photographer of the Year competition close on December 9.

Developed and produced by the Natural History Museum, London, it is open to all ages, nationalities and experience levels. Find more information at: nhm.ac.uk/wpy

After 16 years of chasing storms, a 300km drive and an eight-hour wait, a Montpellier agrometeorologist has won the public’s vote for the Best Weather Photographer of the Year.

The competition, run by the Royal Meteorological Society in association with AccuWeather, is considered to be the most prestigious weather photography competition in the world.

The storm’s position above the sea meant there was no light pollution to obstruct the view. The dry air around the lightning bolts allowed for the sharpness captured in the shot. Dr Zaka was also voted the judges’ runner-up. He said on Twitter: “After 16 years of chasing, 16 years of passion, I have the honour, on the verge of tears, to announce my photo was chosen.”

The 32-year-old has been fascinated by the weather since the age of eight.

Storm-chasing is his night-time passion. He travels within a 300km radius of his home in Montpellier to capture thunderstorms around two to three times a week, and once a month in winter. By day, he studies the impact of the climate on agriculture.

“That photo is just a piece of the puzzle. I still have a lot to show with regards to meteorology and climate change.

“I will continue working, and talking about it, until the politicians and the greater public realise how much work really needs to be done,” he said.