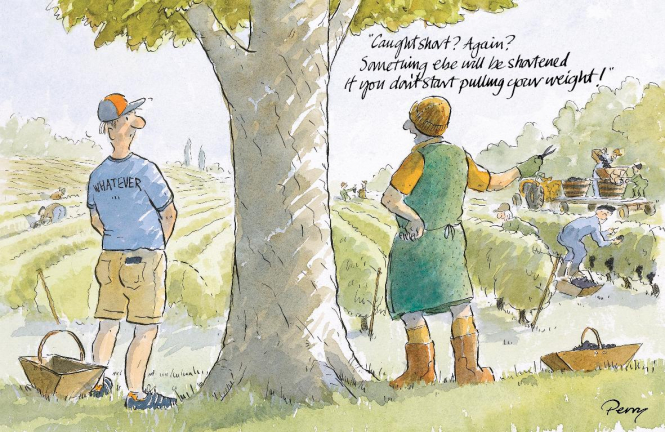 A CDI is the standard private work contract in France and a CDD is a time-limited work contract used for temporary jobs Pic: Perry Taylor.

A CDI, a contrat à durée indéterminée, is what many jobseekers are ideally looking for – a stable long-term job with no set end date.

It is the standard private work contract in France and legally employers must offer one unless they can show good reason not to.

It can be used for both fulltime and part-time work and offers job security. To end such a contract, the employer must show the worker is at fault to merit dismissal or that there are serious financial reasons why they must be laid off.

Compensation is payable unless dismissal is due to serious wrongdoing (in which case, only money owing towards paid holiday is due).

The employer can suggest the employee retires at the usual retirement age but he or she is not obliged to accept.

Usually an employee who resigns is not entitled to unemployment benefit.

However, a CDI may also be ended by mutual agreement, called rupture conventionnelle, in which case the employee receives a compensation payment and can claim benefits.

Technically, a full-time CDI is the one kind of work contract that may exist with no written contract, though one is usual. Employers must give employees a paper containing information they have given to social security body Urssaf to register the new worker. The contract will usually include a job description, working hours, pay and holiday entitlement.

A trial period is only valid if specified and the duration is fixed. Contracts may include a non-competition clause.

In the absence of any other contract, the law assumes an employee has been taken on under a CDI.

French courts have even ruled that people taking part in reality TV shows are deemed to have a contract and are thus entitled to overtime, set rest periods and protection against being sacked

This gave rise to questions over how this is to be interpreted when people are on camera continually or can be voted off...

A CDI helps when asking for a bank loan or mortgage because it is perceived as a stable, long-term income.

Workers in France often stay long-term with an employer – the average length of time being 10.8 years (2019 figures from the OECD) as opposed to eight years in the UK, for example, or 7.2 in Denmark.

However, only certain state-funded structures specialised in helping vulnerable populations will offer them.

A CDD, contrat à durée déterminée, is a time-limited work contract. It can only be used for certain temporary jobs specified by law, which can be full-time or part-time.

These include replacing an absent employee, eg. during maternity, paternity or sick leave; a temporary increase in activity; seasonal work; and certain jobs which are by their nature not long-term, such as working in a short-term teaching post or for a cultural event.

There are some other specific contracts, such as the CDD sénior, which allows over-57- year-olds to sign up to a CDD for 18 months maximum if they are without work and need to top up their employment for their pension rights.

A CDD contract must indicate why it is a CDD, start and end dates, and length of any trial period; the name of the person who is being replaced, if relevant; a renewal clause, if relevant; and a minimum length if there is no set end date (eg. to cover for someone who is on sick leave).

The general rule is that a CDD should last no longer than 18 months, with minor exceptions where it may last for nine, 18 or 36 months.

The salary should not be lower than that which would be offered to a person with equivalent qualifications taken on for the post with a CDI.

Employees must be given their contract no later than two working days after they start.

A CDD with a precise end date can only be renewed twice, if there is a clause in the contract to that effect, or if an additional clause is written in later.

A CDD with no precise end date cannot be renewed.

A CDD à objet défini is for engineers and managers. The contract comes to an end when the job the person has been hired to do ends. It must, however, last between 18 and 36 months. It cannot be renewed.

The contrat de travail temporaire (also known as intérim) is for those employed via a temping agency.

The contract is three-way between the employer, employee and agency and will last the length of a specified task. It can be for full or part-time work and can be renewed twice. The temporary worker must have the same working conditions as other employees.

For all contract types, there are rules on working hours, which should be not more than 35 a week, or the equivalent averaged over a month or year.

Beyond this, a worker can be asked to do overtime of up to two extra hours a day, which should be paid extra and shown on the payslip.

If an employer is facing difficulties, it is possible for them to require workers to reduce their hours. This is then covered by chômage partiel (the employee receives payments in compensation, and the employer is assisted by the state). This was used extensively during the Covid pandemic.

There are minimum working hours of 24 a week (variable if there is a workplace agreement covering this), though if it suits the worker to work less for personal reasons, they may request this.

If an agreement sets a minimum lower than 24, it should give guarantees as to regularity of hours, on full or half-days.

Disputes over private work contracts are settled in a local conseil de prud’hommes, a tribunal not overseen by a professional judge but by a body made up of equal numbers of worker and management representatives.

How long must you keep your business documents in France?

6 hours ago
4
Britons in France: Five groups 'at risk' of missing card deadline