Paris will host the 2024 Olympic and Paralympic Games and take the chance to regenerate one of its troubled suburbs while also rebuilding the reputation of the Games.

The International Olympic Committee announced the news in Lima, Peru, and confirmed at the same time that the 2028 Games will be held in Los Angeles.

Only one completely new competition venue will be built specifically for Paris 2024 – the pool and aquatics centre in Seine-Saint-Denis – and the northern suburb is the focus for much of the Games’ regeneration projects.

It will also host the athletes’ village (with events held in its Stade de France) and this vast project is a symbol of the regeneration as it will be turned into housing after the games with half for private sales and the rest for social housing.

With 95% of the sporting facilities already built, the overall cost of new venues, rebuilding and upgrades to existing sites will be short of €900million – which is vastly less than the excesses in hosting previous Games in Athens and Barcelona – but does not include plans for a new transport system.

To see some of the main Olympic Games sites, click on our Flickr album of graphics from the Paris 2024 organisers, below: 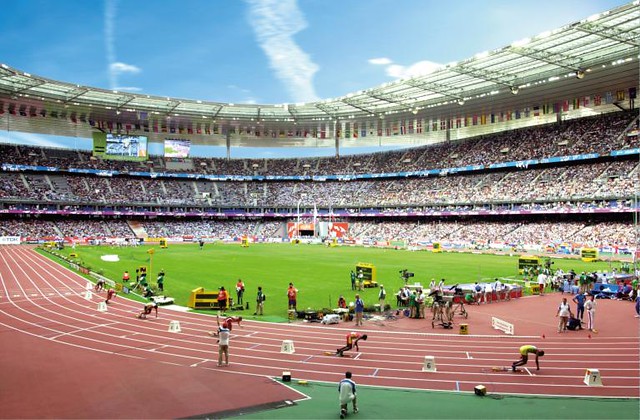 However, experts fear that the overall budget of €6.6billion will soar like the others.

President Macron greeted the announcement of the Paris win, saying it was a “formidable recognition of France” and added “a new page will turn in the next seven years... and the Games represent a magnificent opportunity to accompany the transformation of our country”.

City mayor Anne Hidalgo – who was against the Games project when first proposed by then president François Hollande – said, almost in tears: “Bringing the Games home after 100 years [Paris hosted the 1924 Olympics] brings immense joy… now it’s the start of a new extraordinary adventure”.

Paris is building on its historic reputation, using the Eiffel Tower as part of its logo and holding many events in its shadow, such as the open-water swimming, marathon, triathlon – and the beach volleyball and Five-a-side football right underneath.

Elsewhere, equestrian events will be held in the grounds of the Chateau de Versailles, fencing and Tae Kwan Do in the Grand Palais and the finishing straight for the road cycling will be on the Champs-Elysées.

Events will also be held across France with sailing in Marseille, football in sites from Villeneuve-d’Asque and Nantes in the north to Nice and Toulouse in the south while canoeing and rowing will be in Valres-sur-Marne.

Resident or second-home owner in France?
Benefit from our daily digest of headlines and how-to's to help you make the most of life in France
By joining the newsletter, you agree to our Terms & Conditions and Privacy Policy
1
New UK-France air routes, EU checks alert: Nine France travel updates

1 day ago
3
Heat your house in France with wood? How to apply for aid

2 days ago
4
New EU border checks for entry to France: plans at standstill in UK

Editor's Picks
RSA: What is France’s back-to-work social benefit and who is eligible?
15 February 2022
Ban on non-vaccinated healthcare workers in France to stay – for now
25 November 2022
Covid, flu and bronchiolitis are ‘hitting hard’ in France this year
25 November 2022
French food banks appeal for generosity during annual collection
25 November 2022
‘Language police’ jump on anglicised use of French word ‘juste’
23 November 2022
More from French news
More from Connexion
Get news, views and information from France
Join the newsletter
Subscribe to The Connexion

Healthcare in France
Understand the French healthcare system, how you access it and how you are reimbursed
Inheritance Law and Wills in France
Understand formalities around French succession rules and considerations for buying property
About Us / LegalContact UsAdvertiseUseful numbersSend your storyFAQs
© English Language Media 2022, All rights reserved.
Privacy policyTerms and conditions
Designed byTaiyab Raja