Why are shopping centre chain restaurants so popular in France? 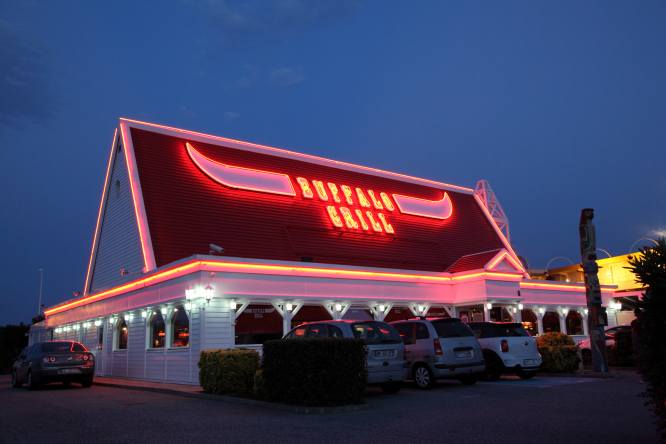 An unwitting tweet by an American tourist enthusing over a meal in a La Pataterie chain restaurant provoked a minor social media storm in September.

As its name suggests, La Pataterie, a chain restaurant with 90 branches in France, specialises in potato dishes.

The effusive tweet was initially met with mockery, especially by Parisians, but the tide soon turned and thousands of people spoke out in favour of the restaurant chain, as well as championing other out-of-town shopping centre eateries.

Much quoted was an opinion poll that found 80% of French people (pre-Covid) had eaten a meal in such a restaurant in the past year.

Anthropologist Fanny Parise has made her name observing and interpreting social trends, and she explained to The Connexion some of the reasons why French restaurants do not just cover the tourist image of fine dining, bistro or family cooking styles.

“Shopping centres where these restaurants are mainly situated are symbols par excellence of peri-urban life, but also of the society of leisure and consumption of the last century,” she said.

“They represent part of our cultural heritage and we see them as a stereotype of a specific lifestyle.

“In a period of uncertainty for many people, like we have now, the quaint and kitsch style of many shopping centres appeals to our sense of nostalgia.

“Even if we say we now detest the areas, the nostalgia remains.

“This type of restaurant is also driven by specific uses, and so reassures people.

“People associate them with going on holiday, for example, occasional Sunday treats for the family, dining after a day’s shopping, dining somewhere near to your work, and so on. These uses are foreseeable and reassuring, and the restaurants play on these sentiments by having aesthetic frames which are very recognisable, a strong restaurant style in each establishment in the chain, and ‘safe’ cooking which matches it.”

This is the opposite, she said, of having a unique dining location where you discover new cooking and tastes.

Nevertheless, the familiarity of shopping centre restaurants is comforting and Dr Parise predicts this wave of nostalgia will grow, post-Covid, just as clothes fashion now echoes the 1980s. “Everything we say we detest about these establishments – that they are too big and impersonal, and have robot-like cooking – could become symbols of a lifestyle which many people now see as being more authentic than they have now.

“The popularity of certain French restaurants as an expression of a social group, which shifts according to the times,” she said.

Buffalo Grill: head of the pack with more than 300 restaurants

By far the most ubiquitous of the French chain restaurants is Buffalo Grill, with its steeply sloping red roofs often visible from ring roads and roundabouts. It offers a western theme, more Lucky Luke than Hollywood, and a menu heavily based on steak-frites, a guaranteed success for most children (and many adults.)

Salads are free and, like most other chain restaurants, there is often a children’s play area, sometimes even with a cowboy- or cowgirl-dressed supervisor.

After a rocky spell 20 years ago caused by the mad cow disease crisis, which nearly saw the chain go under, it has managed to bounce back.

Last year, it bought its rival Courtepaille (an amusing name for English-speakers) from the receivers, making a group with 600 establishments, 200 of which are run by franchisees, and which in 2019 boasted sales of some €800million.

Courtepaille has a strong presence at motorway service stations, and also specialises in steak-frites but with a ‘traditional French restaurant’ atmosphere instead of the cowboys at Buffalo Grill.

Diners usually spend €17.50 a head at a Buffalo Grill and €20 at a Courtepaille.

La Pataterie also flirted with closure, being bought by its present owners in 2017 from the receivers after the previous owners borrowed too much to expand quickly.

Its 90 restaurants, all with a ‘French country restaurant’ theme, are in the process of being upgraded, but the menus, based on potatoes as a main dish and a large choice of desserts, remain the same.

New kids on the roundabouts pop up regularly. In recent years, Au Bureau has made a name for itself with around 160 restaurants, split between town centres and shopping centres. Like Buffalo Grill, it is heavily themed – in this case, based on an English pub.