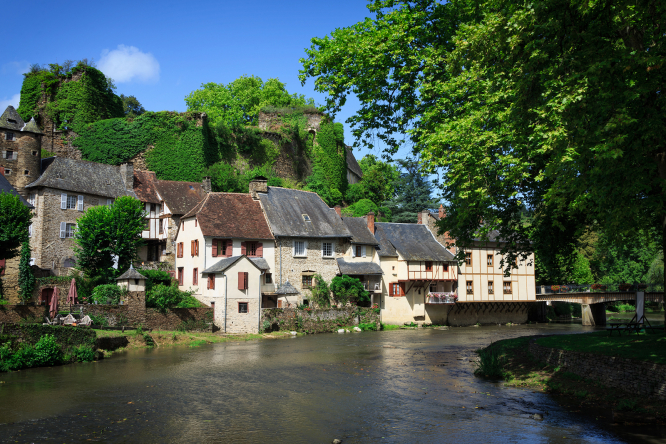 'It makes you wonder why all those people retire to the Med!' Professor Alain Franco says of his preference to the Limousin over the Med Pic: iPics / Shutterstock

Having a strong network of family and friends is still the main factor determining happiness in old age, but geography can play a part too.

However, while thousands of Brits (as well as French people, of course) migrate to the Mediterranean to live out their older years, lured by the warmer climate, culture, lifestyle and beaches, he says that less obvious rural regions can compete just as well, as long as the right infrastructure is in place.

“An ideal town for older people is one where they can get around easily, without there being too much traffic, with pedestrian crossings and lights which do not change too quickly, public benches, public toilets, and shops to keep you supplied within 15 minutes of your home, all of which some towns and villages in the Limousin have.

'It makes you wonder why all those people retire to the Med!'

Homes for people aged over 60 who are dependent and need onsite medical care are called établissements d’hébergement pour personnes âgées dépendantes (Ehpad) and were established around 20 years ago.

So successful has the model been that the care homes have been copied by dozens of other countries, including China.

Accommodation is usually a room, and help with daily life, plus medical provision, is given by staff who are there 24 hours a day.

Ehpads are required to sign an agreement with the departmental council guaranteeing standards and are regularly inspected.

“You have to acknowledge that many elderly people do not have the ideal network of family and friends, which is so important,” Professor Franco says. “We had to find a way of stepping in and the real innovation came from the way they are financed.

“There is money from the state, funnelled through to the departments, the departments themselves which work on the operational side, often with local associations and businesses, and the contribution from residents and their families.

“It is this triple financing which makes the system work.”

However, the pandemic highlighted some cracks in the system, including a spiralling wage bill.

“Even with staff being paid the minimum wage, the finances are often tight. Some establishments found they simply did not have enough cash to buy the extra protective equipment needed for Covid,” Professor Franco says.

There is a real drive, now, for more hospital functions to be incorporated, so that sick elderly people do not have to be moved to hospital when they are at their most vulnerable.

Experts are also looking to see if the present system of home help – often funded by a complex mix of department grants, association volunteers, family, and health mutual insurance companies – can be improved so people can live in their own homes for longer.

“It is something which is done in Germany and the Netherlands, where it is more common for people to stay in their homes until they die but it does not happen so much here.

“People are supported in their own homes until a certain level, and then, hop, it is off to a care home.

“For some, this is a comfortable choice, but others do not thrive under the system.”

living in France
retirement
More from Your views
More from Connexion

French ‘RoboCrop’ pilot scheme could be solution for small-scale farms
15 October 2021
More from Your views
More from Connexion
Get news, views and information from France
Join the newsletter
Subscribe to The Connexion