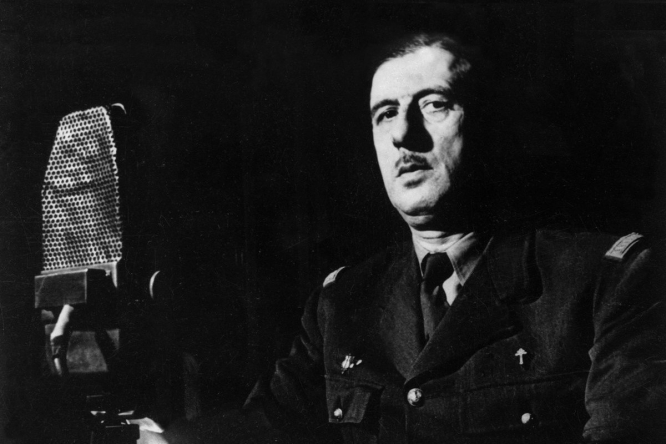 Simon Heffer turns his gaze to French politics. Simon Heffer is also a columnist for the Daily and Sunday Telegraphs.

When a British politician wants to distract attention from his failings, making an overt comparison with Winston Churchill is a pretty safe bet. When, at around the end of the Mitterrand years, I started to follow French politics closely, I quickly realised how Charles de Gaulle performed the same function.

Jacques Chirac and Nicolas Sarkozy felt no restraint in evoking the General when France had to buck up; but in their time it never had to buck up quite so much as now, after the coronavirus crisis. In Britain, we have a prime minister who models himself on Churchill – he even wrote what purports to be a biography of him – and in May, President Macron paid explicit homage to the General. De Gaulle’s political history is more complex than the myth suggests.

Far from establishing himself as the undisputed leader of France in exile in June 1940, it took two years for his allies to start to take him seriously. His reluctance to take them into his confidence angered them and made them suspicious of him.

That anger redoubled when he spoke in August 1944 of Paris having liberated itself, with no mention of how the French contingent that marched into the city had only managed to get that far on the coat-tails of the British, American and Commonwealth troops whose bodies were filling new cemeteries all the way from Bayeux to the capital. But de Gaulle’s legend is especially helpful to Mr Macron now, not least because France has faced no challenge so severe since the last German invader was forced from the Hexagon.

Read more: Nabila Ramdani: sell the Mona Lisa to save us all?

Mr Macron used to evoke a leader from an earlier trial of French spirit, Georges Clemenceau; but now de Gaulle is back. On both occasions when he came to power – in 1944 and in 1958, when after his internal exile at Colombey-les-deux-Eglises, the nation was compelled to send for him to bury the Fourth Republic and initiate the Fifth – he did so as a man of no established political party.

One does not need a long memory to recall that the pitch Mr Macron used in 2017 was remarkably similar and, indeed successful. However, for all the slapdash use of the word, there still really is no ideology of ‘Macronisme’ as there was – and indeed still is – of Gaullisme.

Read more: meet the Doctor who gave sanitiser free to the world

In trying to be all things to all men and women, the president has succeeded in upsetting many of them. Just as he started evoking de Gaulle, 17 deputies in the Assemblée Nationale left his party, La République en Marche, and established their own formation of leftists, ecologists and feminists. Their complaint was the Macron programme was too right-wing for them. His difficulties in getting that programme through will be, if anything, more difficult when this is over, a realisation that has prompted speculation about legislative elections. Such elections would be unlikely to return a majority for LREM, which is likely to stop them happening.

Mr Macron’s approval ratings are in the mid-30s percentage range. His term has nearly two years to run, but the damage done by the Macron regime’s handling of the coronavirus could be so profound in terms of unemployment, business failures and other assaults on prosperity that it could be stuck at the forefront of voters’ minds in 2022. He must develop a new narrative now, and he cannot be blamed for seizing upon the greatest French statesman in living memory to try to help him forge it.

The spirit of resistance

It is de Gaulle’s esprit de résistance that Macron hopes to harness among his countrymen, to his benefit. It is an interesting concept. It is unquestionable that de Gaulle had such a spirit, as did millions of French, whose heroism against the Nazi occupier was awesome. But, equally, many French collaborated or, in 1940, turned and ran.

After the épuration of 1944-45, the purging of and score-settling with les collabos, to the excesses of which de Gaulle turned a blind eye, he developed the myth that all had resisted. It was a myth shattered in 1969 by Marcel Ophuls’s stunning four-hour documentary Le chagrin et la pitié, about résistants and collabos in Clermont-Ferrand. The facts the film set out were so shocking to a nation reared on the Gaullist myth that the film was banned from television until 1981. When Mr Macron talks about the spirit of resistance, he moves into choppy contextual waters.

Yet his pursuit of Gaullist atavism continues. Mr Macron is now also deploying the Cross of Lorraine, a powerful symbol of the resistance. At a photocall in his office volumes of de Gaulle’s war memoirs were pictured lying about. Those are the memoirs that famously begin with the phrase: ‘Toute ma vie, je me suis fait une certaine idée de la France.’

Mr Macron’s idea of France is that it needs to be made to face up to the scale of the problem caused by the coronavirus by identifying with the horrors of 1940-44 – and not to blame him or his ministers for difficulties resulting from this crisis. A golden opportunity to drive this message home, and for which Mr Macron has been preparing, is the commemoration on June 18 of de Gaulle’s famous appeal from London, on the 80th anniversary of its broadcast in 1940.

Perhaps he can create this selfless mindset among his electors. But when this crisis is over, the old divisions in France between the people and the elite that have driven so much protest in the last 18 months are likely to have been made even worse by the undermining of prosperity.

As with his counterpart in the UK, his job has been made harder by recent events: even son Général may not be enough to haul him out of it.

Read more: France StopCovid app: How it works and how to get it