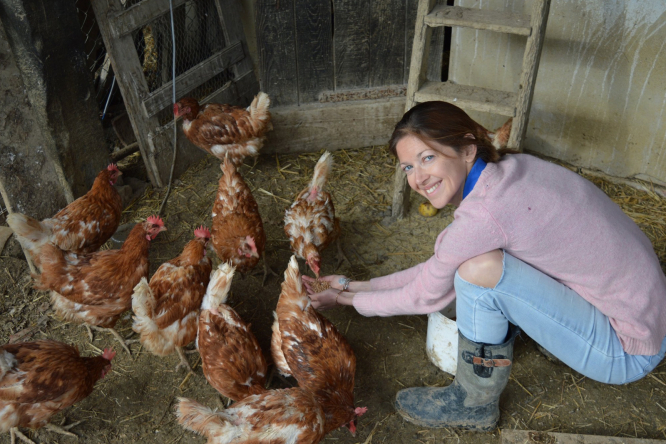 A charity that saves commercial laying hens from slaughter at 18 months old has rescued nearly 10,000 birds.

Champs Libres aux Poules was set up last year by Heidi Carneau, a Frenchwoman who lived in the UK for several years and adopted hens from the British Hen Welfare Trust.

When she moved back to France in 2019 to settle in the Gers, she discovered there was a battery farm nearby.

“I took on some of their hens, thinking this was a personal project, but I put an appeal on Facebook for others to do the same and got a phenomenal response,” says Ms Carneau.

“In two days I had rehomed 400 hens. Some of the new owners were happy to become volunteers and we set up Champs Libres aux Poules.

“We now have a rehoming day almost every month, when we collect hens from one of around 40 farms, not just battery farms, all over Occitanie, and deliver them to designated pick-up points.”

A laying hen starts producing eggs at six months, but after a year they do not lay enough to be commercially viable and so are generally sent to the abattoir at 18 months.

“It is very difficult to find out what happens to the dead chickens,” says Ms Carneau, “but I believe some are sent to Africa for human consumption, some go for dog food and others are incinerated.

“It is heartbreaking that these hens are regarded as worthless after they are no longer commercially viable. Our motto is based around three key words: Adoption, to offer a new life to the hens; Education, to give advice on how to look after them; and Evolution, to show that hens can make wonderful pets, just like a dog or cat.

“People tell us they had no idea they would create a relationship with a hen and they are just so much fun.”

If potential owners have not kept hens before, an experienced volunteer will telephone to give advice, including on hen coops and the amount of land needed.

They are asked to take at least three hens and a maximum of 10. Although there is no set price, people usually give a donation of €4 a bird, which helps to buy crates and cover transport costs.

Most hens will lay three or four eggs a week, but that is not the main motivation for adopting, says Ms Carneau.

“Most people’s reason is to save hens from the slaughterhouse. Homing days are exhausting – collecting the chickens and taking them to pick-up points – but in the evening it is so rewarding to receive photos of happy hens with their new families.”

The charity is always keen to attract volunteers, particularly those who can help with transport or look after hens which are in poor health and need nursing, which happens from time to time.

Ms Carneau would also be happy to hear from anyone outside Occitanie who might like to expand the charity in other regions. Email info@ champslibresauxpoules.com.

Readers who want to adopt can be notified of forthcoming rehoming dates by subscribing to the charity’s newsletter at champslibresauxpoules.com.

Most hens in France are still in cages

animal protection
More from Your News
More from Connexion

Exploring mountain refuges and cabins in France
19 October 2021
More from Your News
More from Connexion
Get news, views and information from France
Join the newsletter
Subscribe to The Connexion