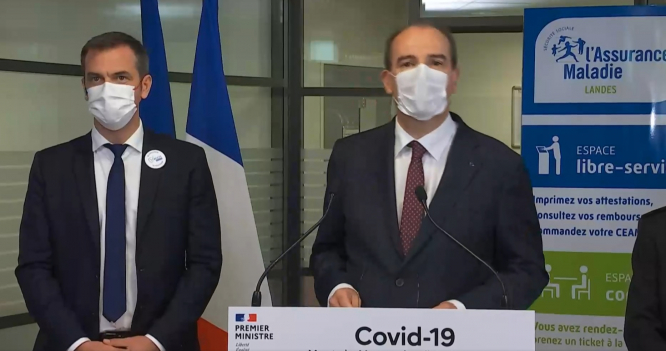 The department in Nouvelle-Aquitaine is the only one in metropolitan France where cases are currently above the alert threshold of 50 per 100,000 inhabitants, with 70% of new cases now identified as the Delta variant.

This is compared to an average of 9-10% of cases across the whole of France.

A cluster of 29 cases of the new, more contagious variant has been identified in an elderly care home in the department. Of the residents infected, 21 had been fully vaccinated. Six staff were also infected.

Three of the residents were admitted to hospital, but not intensive care – prompting suggestions that the vaccines are working as they should; to prevent severe forms of the illness.

“This department is the only one where we are seeing a rise in the epidemic, and the only department in the country to have gone over the threshold of alert of 50 per 100,000 inhabitants.”

Mr Castex and Mr Véran arrived in Mont-de-Marsan, Landes, at 09:00 this morning. Their itinerary includes visiting a medical centre to receive an update on vaccinations in the department, and speak to patients.

One doctor said that a noticeable number of patients aged 20-45 in the area have declined to be vaccinated.

The ministers then visited a shopping centre in Saint-Pierre-du-Mont, to help with a testing campaign by the Croix-Rouge and la Protection civile. They later headed to the Landes CPAM to learn more about its contact tracing programme.

Mr Castex has now held a press conference, and did not “rule out the postponement” of the lifting of all Covid health measures, which had been scheduled to happen from July 1.

The ministers also reaffirmed the importance of maintaining the vaccination campaign throughout the summer.

Mr Castex called on people in Landes to get vaccinated, and said that the department’s vaccination deliveries would “rise from 40,000 to 60,000 in the next seven days”.

Could the Delta variant cause a new wave in France?

Mr Attal said that elsewhere in France, “around 60 cases” had been identified in the Bas-Rhin, “with several clusters, especially in Strasbourg”.

And in Ile-de-France, the variant represents 12-13% of contaminations.

The Delta variant has been reported in 85 countries since it was first identified in India at the end of last year. It is threatening to cause a new epidemic wave in Portugal, and is the source of rapidly rising cases in the UK, which pushed its planned lifting of Covid restrictions back by four weeks as a result.

Read more: Merkel calls for all of EU to follow Germany and quarantine Britons

Mr Attal said that “[France] is still very low in terms of contamination, and for the moment [the variant] is spreading slowly, but it is continuing to climb”.

He said: “The risk is that it takes dominance over the other variants. The thresholds must stay very low so that we can control it, and avoid it rising exponentially.”

Andrea Ammon, director of the European Centre for Disease Prevention and Control (ECDC), told the AFP: “It’s very probable that the Delta variant will circulate significantly over the summer [and that] it will represent 90% of new infections in the European Union by the end of August.”

A study on the variant in the UK showed that the people who were most affected by it had not been vaccinated (77%), or had only received one dose.

As a result, the ECDC is calling for an increase in vaccinations, and for people to maintain barrier gestures, especially if they are not fully vaccinated (or within three weeks of their jabs).

It said: “Any letting go [of measures] during the summer could cause a significant and rapid increase in the number of daily cases in all age groups.”

This could lead to a rise in hospitalisations and deaths, which “could reach the same levels as in autumn 2020, if no extra measures were taken”, the ECDC said.

The vaccines are considered to be less effective against the Delta variant, especially after only one dose.

Dr Benjamin Davido, an infectologist at the infectious diseases service at the Raymond-Poincarré (AP-HP) hospital in Garches, told La Dépêche: “With one dose, we reach around 30% vaccinal protection against this variant, with an mRNA vaccine [Moderna or Pfizer].

“We will need at least 70% of the population to have received two doses to form an obstacle against this variant.”

At the current vaccination speed, it will take until October 6, 2021, for France to have vaccinated the entire eligible adult population (52 million people).

But yesterday Mr Attal was optimistic about the current situation in France.

He called for “absolute vigilance”, but said that in general, “improvement is confirmed at the national level, and day after day, the return to normal life is progressing”.

He said that the incidence rate across France as a whole is now 24 per 100,000 inhabitants; less than half of the alert threshold of 50.

The number of people in critical care (intensive care units, and high-level monitoring) has dropped to 1,509 compared to 1,560 the day before. This measure has been dropping since the end of April, when the country saw a peak of 6,000 patients.