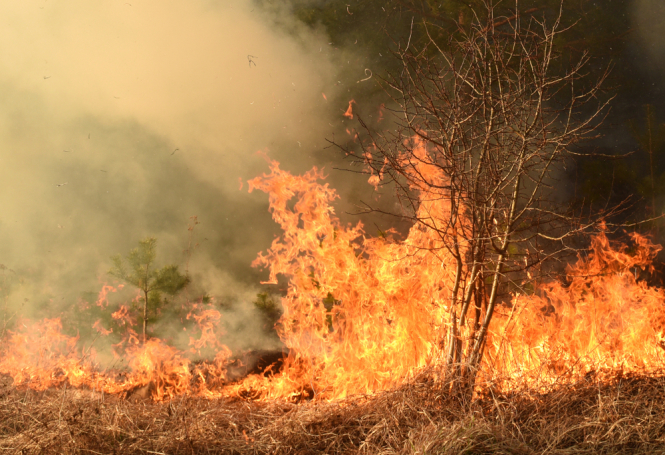 More than 850 hectares of vegetation have been destroyed in a wildfire in Moux, in Aude, southern France. 800 firefighters were still on-site this morning (July 25), and the fire is not yet under control.

The A61 road between Toulouse and Narbonne was closed for a few hours and 90 people were evacuated from the commune of Fontcouverte. They were able to return home in the evening.

The fire also caused electricity power lines carrying power to France, Spain, and Portugal, to be temporarily cut off.

By 05:00 this morning, more than 900 hectares had been destroyed. More than 800 firefighters from Aude, Haute-Garonne, Tarn, Ariège and Bouches-du-Rhône were in attendance.

Two Dash planes, six Canadairs and one Bombardier helicopter also worked throughout the night to contain the blaze.

Interior Minister Gérald Darmanin confirmed that 152 “airdrops” of water were made.

This morning (July 25) at 08:00, Aude prefect Joëlle Gras told France Bleu Occitanie that the fire “was not yet under control. We have wind with gusts of up to 40kph, the situation is still unstable, the vegetation is extremely dry,” she said.

She also explained that the cause of the blaze was “as yet unknown”.

Yet, firefighter Colonel Jean-Luc Baccari said later, at 12:30, that the fire had started in the “central reservation of the A61 motorway”.

He said: “I can’t be sure on the exact origins of the fire. [But] everyone can guess pretty easily what the probable origin was. It is sadly very likely that it was caused by a cigarette butt thrown [from a car].

“When the vegetation is as dry as it has been in the Aude for several days and weeks, it is quite realistic that a simple cigarette butt from a car could create such a disaster. It's a safe bet that this type of carelessness is the cause of these roadside fires."

By mid-morning today (around 11:00), the mayor of Moux told FranceInfo that the fire was “partly under control but still progressing”. A statement from the local fire department said it was “currently contained”.

Colonel Beccari said: “We stabilised a large part of the incident overnight.”

No injuries or major damage to homes have been reported, except for one roof and one car. Yet, vegetation around the communes of Moux, Fontecouverte, Fabrezon, Ferrals-les Corbières, and Camplong-D'Aude has been destroyed.

Ms Gras explained that there would be a “research unit set up to investigate the cause of the fire”.

She said: “The objective now is to take control of the fire by the end of the day. We remind everyone to take the greatest care. Remember that nine in 10 fires are due to human activity, and really show the importance of everyone to adapt their behaviour in function of the risk.

“We must not throw cigarette butts, nor have wild barbecues. And, if you see a fire starting, call number 18 immediately.”

The fire comes less than a month after another wildfire struck Aude, during which 300 hectares were burned.

Fire prevention website Prevention Incendie has the following advice if you see a wildfire starting:

11 hours ago
4
Has reducing the French speed limit to 80km/h saved lives?