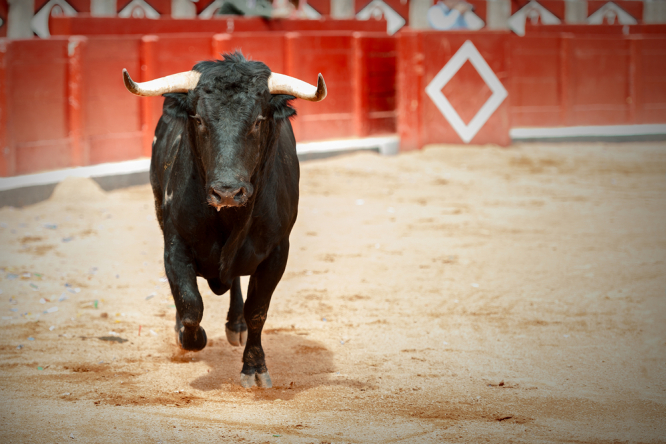 Bullfights will be held this weekend in the French Basque Country after being cancelled for two years due to the health crisis Pic: David San Segundo / Shutterstock

The town of Béziers in the south of France this week became the centre of a street poster war for and against bullfighting, waged between the local mayor and actress and animal rights campaigner Brigitte Bardot.

Earlier this week, judges ruled against banning bullfighting in the town on the grounds that it is a traditional, and popular, form of entertainment.

This summer Béziers will host four bullfights from August 12-15.

On Monday (July 26), the Fondation Brigitte Bardot put up 3x4 metre posters in Béziers, Bayonne and Perpignan showing a bull running in an arena along with the text “Animal suffering guaranteed at this event”, and “Stop bullfighting!”.

The mairie in Béziers, run by right-wing mayor Robert Ménard, responded by putting up its own posters, targeting Ms Bardot directly.

The posters show the actress as a young woman alongside a photo of the Spanish matador Luis Miguel Dominguín. The text implies the pair were lovers, reading: “They loved each other so much” and “Brigitte did not always say no to matadors”.

Mr Ménard shared a photo of the poster on Twitter, with the caption “Brigitte, we love you anyway you know”.

The tweet has since been deleted and the posters removed. In a second tweet, Mr Ménard said this was due to a “lack of humour from the directors at the Fondation Brigitte Bardot”, who have now filed a complaint against the mairie in Béziers.

Ms Bardot herself also tweeted a response to the incident.

“If I had an affair with a bullfighter, I would have kept his ears and tail”, she wrote, referring to the tradition at the end of a bullfight of awarding the skilful fighters body parts from the dead bull.

Bullfights to go ahead in Basque Country

Béziers is not the only town in France that holds bullfights.

The traditional event is normally associated with Spanish culture, but many French towns near the Spanish border also host bullfights throughout the year, including Carcassonne, Saintes-Maries-de-la-Mer, Bayonne, Mont-de-Marsan, Dax, and Arles.

Some of these are dubbed ‘gentle bullfights’, meaning that the bulls are not killed when they fight against the matador. Instead, the matador may have to complete risky feats such as retrieving a ribbon from between the bull’s horns.

Corridas, such as the bullfights held in Béziers, do normally result in the bull being killed.

Some fights begin with horseback bullfighters jabbing the bull with spears, before it fights to the death with a matador.

Today and tomorrow (July 30 and 31) bullfights will be held in the arena in Bayonne, after being cancelled for two years due to the health crisis.

They are the only bullfights that will be held in the Basque Country, in France and Spain, this year. Attendees will need a valid health pass to access the event.