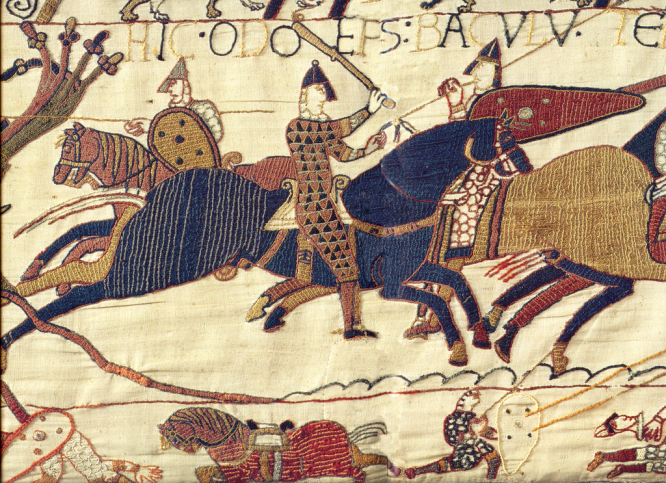 The Bayeux Tapestry, which shows the lead-up and aftermath of the Battle of Hastings in 1066, is much-debated
By Connexion journalist

Historians have long disagreed over the origins and original intentions of the celebrated tapestry.

Some have claimed that it was created to decorate a Norman home in England, while others have suggested that it was actually made to hang in a church or cathedral in Norman France.

Now, British researcher and professor of art history at the University of York, Christopher Norton, has said that he believes that the tapestry was definitely made especially for Bayeux Cathedral (Bayeux, Calvados, Normandy).

In a new article published by the British Archeological Association, Mr Norton has claimed that the cathedral’s nave at the time would have been of the exact dimensions of the work.

According to Mr Norton, the tapestry’s design corresponds exactly to the then-layout of the cathedral.

The first scene - the coronation of Edward the Confessor in 1042 - would have been visible from the south entrance, with the story continuing through to the nave, to an image of King Harold on the throne, Mr Norton said.

The tapestry would then have continued into the choir area, he said, beginning with the scene in which William the Conqueror is constructing navy ships, continuing to the depiction of William going to sea, which would be seen in the centre of the choir.

The third section of the piece would continue into the north side of the cathedral building, detailing the arrival of William the Conqueror and continuing to the defeat of the English, including the famous and much-debated scene in which King Harold appears to have been killed by an arrow shot to his eye.

The scene in which "Harold rex interfectus est" - King Harold is killed, apparently by an arrow, a detail that is disputed by some historians (Photo: Myrabella / Bayeux Tapestry / Wikimedia Commons / Public Domain)

The final section of the tapestry has been lost, but historians believe that it would have shown the final triumph and coronation of William the Conqueror.

Mr Norton has admitted that his conclusions may be controversial within the academic community.

The famous piece was indeed kept, and sometimes displayed, in Bayeux Cathedral for several centuries, and was shown in Napoleon’s own museum in Paris for a time.

Since 1983, it has been held in the Bayeux Museum at the former seminary of Bayeux.

Last year, French President Emmanuel Macron promised to lend the tapestry to Britain for an exhibition in 2023, during which the Bayeux Museum is planning to create a new display setting for its return.

Mr Norton said that he hopes his work may influence the way in which the tapestry is hung when it arrives in Britain, and said he would especially like to see it displayed in a “rectangle, on three sides”.

He said: “From the middle, this would allow viewers to see, for the first time in centuries, a vision close to the original position, and to rediscover the subtlety and inventiveness of this fascinating work of art.”

Despite its name, the Bayeux Tapestry is not actually a tapestry. It is made largely with wool, and embroidered into linen, rather than woven.

It is thought to have been commissioned by Bishop Odo, the half-brother of William the Conqueror, the latter of whom led the conquest of England and took the crown in 1066.