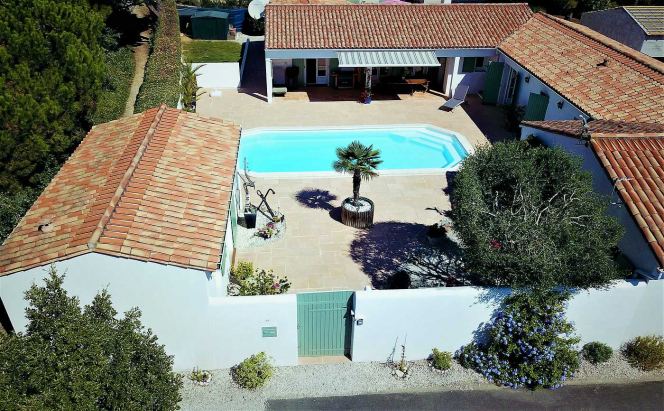 Nigel St George said he was shocked to be asked for his bank statements from when the house was built in 2004/5 to prove all bills to tradesmen were paid Pic:

A Connexion reader faces a capital gains tax bill €150,000 higher than expected after selling his second home – because stricter non-EU rules are being applied post-Brexit.

Since Brexit, UK residents who sell a French property must use a fiscal representative for capital gains formalities if the sale is for more than €150,000 – the same as for all non-EU countries.

The expert takes legal responsibility for the correct payment of the tax.

This avoids the tax office having to chase up bills from sellers around the world in areas without the coordinated rules on mutual legal enforcement that exist between EU states.

It means the representatives are often scrupulous about tax rules, as retired IT company owner Nigel St George, 69, from Surrey, discovered after selling the house he had built in 2004-05 on Ile de Ré.

He said he was shocked to be asked for his bank statements from the time to prove all bills to tradesmen were paid.

Bills and cheque stubs were not accepted, despite official French government advice to members of the public to keep these for five years.

He did not have the statements and his French bank could not provide them from before 2011, when they were digitalised.

“I’ve written to our MP about this, and he has written to the British Embassy. It’s unbelievable. Among our French friends, no one can believe it.

“However, we have heard many Britons saying the same thing, now we have left the EU.

“The notaire would have dealt with it before, and ours has known us and the property from day one. The fiscal representative is ticking boxes.

“He doesn’t know us or the building. I said it’s as though you are saying the building has no value – and he said ‘I’ll have to put €1 to make the calculator work’.” Mr St George said he has calculated a €120,000 gain using his bills.

The representative is only willing to accept part of the bills, giving an estimated €180,000 tax bill.

The representative could not confirm how the money would be repaid, Mr St George said, suggesting he might have to go to court, incurring further costs.

He said he had been careful to follow advice he received at the time of having the home built, keeping all bills and only using local firms and not foreign ones.

He is considering changing representative but fears the rules applied may be the same.

The Connexion spoke to one fiscal representative, Isabelle Chanavat from the Société Accreditée de Représentation Fiscale (Sarf) in Paris, who confirmed that asking for bank statements is standard.

A very large guarantee can be required in their absence, accounting for the possibility that the tax office accepts none of the bills, meaning the gain is calculated minus the work (in this case on building land), and that it may levy heavy penalties.

She said, however, that there is no reason for the money not to be paid back after three years, the usual period for queries.

She could not say why the représentant had given a higher capital gain estimate than Mr St George believes appropriate, but said it may be because not all kinds of work are eligible.

She confirmed that using foreign firms is often problematic, as bills may not have all the information required in French law. They must be translated and there must be evidence that French VAT was paid.

English-speaking notaire François Trémosa, from Trémosa-Leschelle & Associés in Ramonville-Saint-Agne, Haute-Garonne, said: “After three years, the money should be sent back to the seller. He does not have to ask for it – the notaire should take care of it.”

He added that he usually advises all clients buying property to keep old bank statements in case of issues with tax, a divorce, or inheritance matters.

He was “not surprised” if représentants were asking for them as “if there is an issue, it is the représentant who is liable to the tax office”

Official launch of group for ‘British Europeans’ in France

23 hours ago
5
Coronavirus: Daily updates on the situation in France

18th century château in southwest France up for auction from €90,000
17 June 2021
More from Brexit
More from Connexion
Get news, views and information from France
Join the newsletter
Subscribe to The Connexion