Impossible to agree everything in 11 months - EU chief 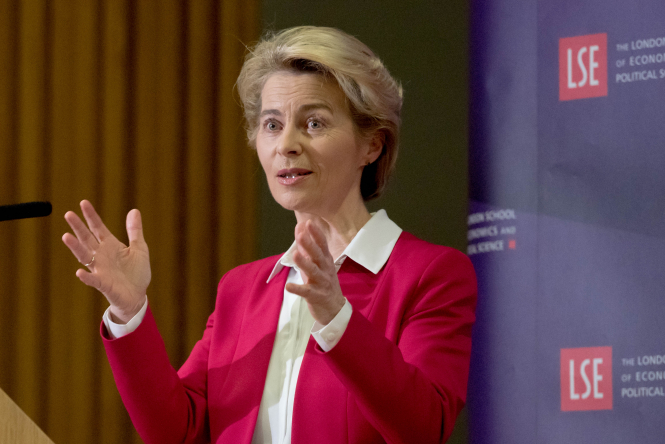 Speaking at the London School of Economics, where she once studied for a year, Ursula von der Leyen said: “Without an extension of the transition period beyond 2020, you cannot expect to agree on every single aspect of our new partnership. We will have to prioritise.”

During questions and answers after the speech she also addressed rights of British people living in the EU and EU citizens in the UK, saying “the good news is, where you work and live you can stay under the same conditions till the end of your life, so you have an absolute clear status and the same rights and possibilities.”

For Britons abroad in the EU, that meant in the countries they live in, she said. Going further would require agreeing to continue reciprocal free movement she said, but the EU was open to all possibilities.

She did not respond directly to a question about the possibility of an associate EU citizenship for British people.

The short timeframe for the next phase of negotiations comes from the fact that end date of December 31, 2020 was originally planned with a Brexit date of March 31, 2019 in mind.

The Withdrawal Agreement allows for an extension by one or two years, however the UK government has ruled out extending beyond this year.

Ms von der Leyen said: “The European Union's objectives in the negotiation are clear. We will work for solutions that uphold the integrity of the EU, its single market and its customs union. There can be no compromise on this.”

She said however the EU is ready to negotiate a “truly ambitious and comprehensive new partnership” and they will “go as far as we can”.

“The truth is that our partnership cannot and will not be the same as before,” she said.

“And it cannot and will not be as close as before – because with every choice comes a consequence. With every decision comes a trade-off.

"Without a level playing field on environment, labour, taxation and state aid, you cannot have the highest quality access to the world's largest single market.

“The more divergence there is, the more distant the partnership has to be.”

She added: “We are ready to design a new partnership with zero tariffs, zero quotas, zero dumping. A partnership that goes well beyond trade and is unprecedented in scope.

“Everything from climate action to data protection, fisheries to energy, transport to space, financial services to security. And we are ready to work day and night to get as much of this done within the timeframe we have.”

Ms Von der Leyen said she is now certain the UK will leave at the end of the month, meaning there will be more clarity in the next phase of talks, whereas until now the possibility that Brexit would not happen had caused added tension.

“And so, in just over three weeks, on 31 January, the UK will spend its last day as a Member State. This will be a tough and emotional day," she said.

“But when the sun rises again on 1 February, the EU and the UK will still be the best of friends and partners. The bonds between us will still be unbreakable.”

She also spoke of her love for Britain and London, calling the UK “strong-willed, open-minded and big hearted; proud and patriotic; kind and generous in spirit; full of traditions and contradictions”.

Ms von der Leyen said it was Winston Churchill who had made the “best case for a united Europe” after the World War Two and many British people had contributed to the European Union.

The UK had taken a lead over opening up the EU to new countries from the former Eastern bloc, she said.

She added: “I think of the British servicemen and servicewomen who have helped to keep the peace from the Balkans to the Baltics. And I think of the millions of ordinary British people who have taken to the streets in pro-EU marches in the last few years.”