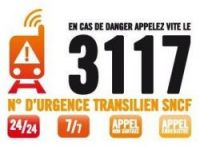 SEX pests on public transport are to be targeted in a national campaign after a study showed that every woman passenger had faced sex harassment or worse.

The 12-point government plan will cover prevention, better ways to get help and aid for victims. It aims to pinpoint problem areas, use advertising to increase awareness of the problem and ways to help, and increase security.

Tests are to start soon in Nantes on one of the most progressive features, with late-night buses dropping lone women passengers at or near their homes rather than face a long walk.

The SNCF is also looking at increasing late-night staffing on trains and also at increasing the use of single-corridor trains that are open the length of the train, so that women can avoid sitting alone.

A study by the equal rights agency HCEfh showed that 100% of women passengers admitted to having faced sexual harassment on public transport and the agency said it showed widespread predatory behaviour against women – behaviour which was not well known and which had been largely minimised.

The government is acting on recommendations from the study and the SNCF has already started organising meetings and station visits with groups of women to identify problem areas, such as where lighting was poor or there was no video camera coverage.

Later, an autumn advertising campaign will inform passengers of the law and what to do if there is a problem. It will also highlight an existing helpline, 3117, to get help on SNCF trains, including printing it on tickets. A geolocalisation app is also being developed to signal any problems.

Sex harassment is an offence that could lead to five years’ jail and €75,000 fine.