CONFIRMED: End of lockdown in France set for May 3 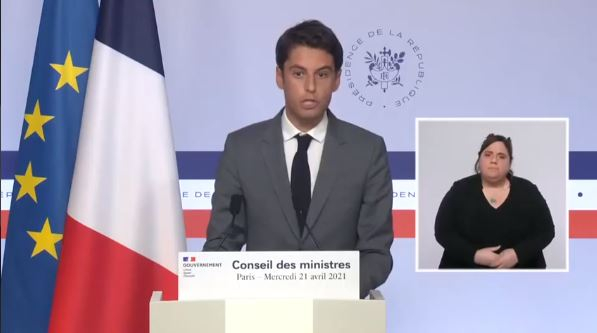 Government spokesman Gabriel Attal speaking during a press conference on April 21 where he confirmed that the deconfinement schedule originally announced by President Emmanuel Macron on March 31 would be respected Pic: Élysée / @Elysee / Twitter

France is set to lift its partial lockdown on May 3, four weeks after it was introduced. However, the 19:00 to 06:00 curfew will remain in place.

It will mean an end to the ban on interdepartmental travel and an end to staying within 10km of your home except for essential reasons. It will also mean an end to exemption forms (attestations de déplacement) during the day.

Gabriel Attal, the government spokesman, said today (April 21) that the calendar of events set out by President Emmanuel Macron on March 31 would be kept to - see our article on that here.

It also means that shops, cultural places and the terraces of cafés and restaurants will be progressively reopened from mid-May.

Mr Attal said that this stage of the reopening may be carried out geographically, based on where the pandemic is most under control.

President Macron said on March 31: “From mid-May, we will begin to reopen certain culture venues. We will authorise under strict conditions the opening of terraces and we will build, between mid-May and the beginning of the summer, a progressive reopening schedule for culture, sports, leisure, events, our cafes and restaurants.”

A press conference will be held tomorrow (April 22) where the return to schools will be addressed as well as the progression of the Covid-19 epidemic in France and the country’s vaccination campaign.

President Macron is expected to announce the reopening of the currently closed public establishments himself, but no date has yet been set for this.

Earlier, Mr Attal said that the first effects of the restriction measures "are perceptible".

"It appears that we could be at the peak, or close to it.

“However, the epidemic is only receding half as quickly as in November," Mr Attal said, who attributed this slower drop off to the appearance of variants.

Mr Attal also confirmed that Johnson & Johnson’s Covid-19 vaccination will start being rolled out in France from Saturday (April 24).

It was set to be rolled out in France earlier this week but was pre-emptively halted by the company due to reports of rare cases of blood clotting in patients in the US. Read more about that here.

It was also confirmed today that travellers arriving from India will be subject to a mandatory quarantine on arrival of 10 days. This measure has already been announced for travellers coming from Brazil, Argentina, Chile, South Africa and French Guiana.

A new Covid variant has appeared in India which has led to a surge in cases in recent days.

2 hours ago
5
Coronavirus: Daily updates on the situation in France