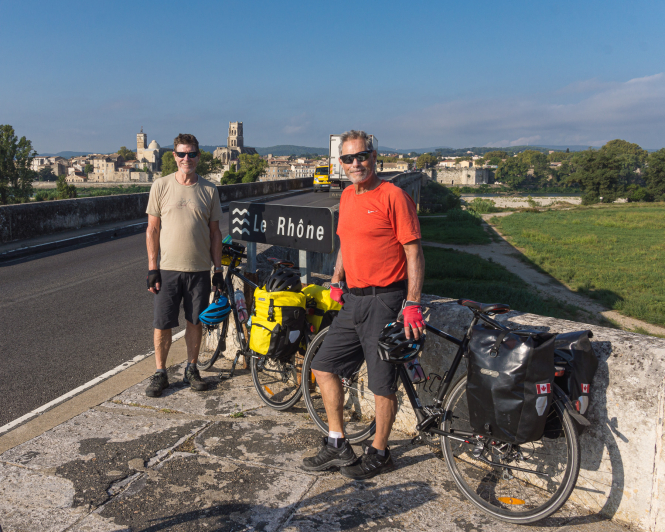 Jeff Oates (left) on a cycling trip to France in 2018. Pic: Jeff Oates

A group of four Canadian cyclists have had to cancel their trip to France after the French Foreign Affairs Ministry failed to send them their health pass QR codes in time for their flight.

Jeff Oates had booked to travel to France with his brother and two cousins on September 7 for a three-week cycling tour following the Rhone River route.

They would have needed a health pass  – which could take the form of vaccination certificates, proof of a negative test result or of recovery from Covid – in order to enter public spaces such as restaurants, bars, hotels with shared spaces and long-distance transport.

Read more: How to get a French health pass - A guide for residents and visitors

The group had applied for passes on August 10, following instructions provided by the French government or non-EU tourists.

This involved emailing the necessary documents to the Foreign Affairs Ministry, who would then convert them into a QR code compatible with the TousAntiCovid app.

The following day, two of them received messages saying that it was too early to apply and to try again later, which they did. The other two did not get this message and were sent their QR codes on August 17.

The Connexion notes, however, that as of August 10 the ministry instructions stated that the system was open for those already in France or arriving by August 15, with requests concerning later dates to be dealt with later on. It was never fully clarified if that meant it was possible to apply for later dates nonetheless, or if people should wait.

Mr Oates was then emailed by the ministry service, who said: “We are sorry to inform you that we are currently receiving a very large number of requests and will not be able to process them all,” and recommending that travellers obtain their health pass by paying for antigen tests every three days.

However, after their arrival in Paris the group had reservations for a TGV train to Avignon, and so did not have the time to carry out a pharmacy antigen test and wait for the result.

This message came as a new online system was launched, allowing travellers to upload their documents to a government portal which would verify them and generate a QR code.

“We assumed the new system would be faster because the receiving party would not have to manually enter all the information as they had to in their old system,” Mr Oates told The Connexion.

“All that would be needed would be to review the entries and documents and issue the pass.”

Mr Oates received an email confirming that his application had been submitted successfully, but has still not had his QR code.

He, his brother and cousins felt they had no choice but to cancel their flights and the 42 hotel room nights that they had booked and “that would have been a boost to the French economy.”

“It was a real downer for all of us to cancel,” Mr Oates said. “We had been riding here [in Canada] once or twice a week as a group for training rides and were counting down the weeks, then the days.

“We are all down a bit but it’s a ‘First World problem’ so we have to put it in perspective.

“We are going to try and reschedule the same route in late spring 2022 now. By then we might have our pass sanitaire!”

Luckily, the group were able to cancel and receive refunds for all their bookings. “The travel industry is quite cooperative and flexible with the Covid situation,” Mr Oates said. “The government bureaucracy is another story though.”

Mr Oates added that his daughter and son-in-law were also travelling in Europe, and as yet unable to spend time in France because one of them is still waiting for their health pass.

When The Connexion contacted the Foreign Affairs Ministry about the health pass delays, a spokesperson said that the department was “looking into the matter” and would provide responses “as soon as is possible.”

The ministry website states that “We are doing our utmost to process the applications as quickly as possible.”