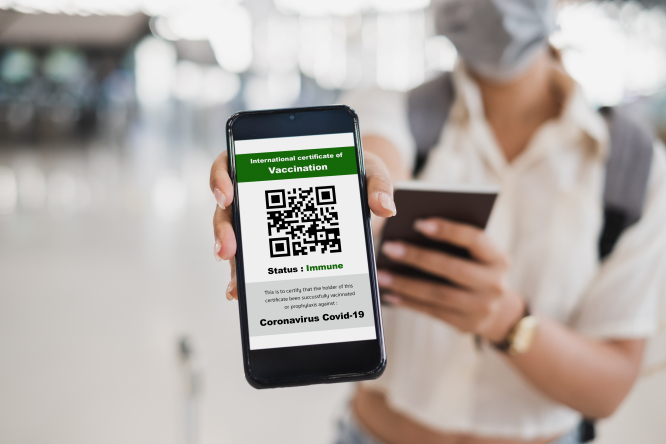 France set up a system allow non-EU tourists to get a QR code proving their vaccination status in early August, but many people have reported issues with it Pic: Nattakorn_Maneerat / Shutterstock

Tourists to France from outside the EU are experiencing long delays in getting a QR code that is compatible with France’s health pass (pass sanitaire) system so they can show they have been vaccinated against Covid.

A Covid health pass - meaning proof of being vaccinated, having recently tested negative for Covid or having tested positive between two weeks and six months prior - is required to enter most public places in France, including restaurants, cafés, museums, cinemas, etc.

One US tourist told The Connexion he recently cancelled a five-week trip to France, due to start on September 2, and that the “anxiety of trying to spend five weeks in France without a QR code was definitely one of the factors.”

“I am in favor of such a health pass, and wish that such a thing would be implemented in the US, but the process will not work if the application process is not expedited,” he said (name withheld).

He applied for the health pass QR code on August 16 and had had no response by August 26, when he cancelled the trip.

Another reader, who owns a second home in France and was vaccinated in Scotland, applied for a health pass QR code on August 12, but is still waiting.

France put in place a system in early August for tourists who have been fully vaccinated against Covid-19 outside the EU to get a QR code compatible with its health pass system, if they have been vaccinated with an EU-approved vaccine.

You can read our step-by-step guide to doing this here: How tourists can get a Covid vaccine QR code recognised in France.

The Connexion is aware of the system working for some tourists, but several readers - particularly from Scotland and the US - have reported long delays.

People vaccinated in England, Wales and Northern Ireland do not need to apply for a QR code through the French system, as their vaccination certificates have a QR code on them that can be scanned and verified in France.

This is not the case for people vaccinated in Scotland, where vaccination certificates do not yet have a QR code on them.

Peter Fereday, 76, was vaccinated in Scotland but has been at his second home in the Dordogne in France since July 1.

He and his wife applied for health pass QR codes through the French system on August 12, and have still not received them.

“We have been badly let down by the Scottish government in failing to 'internationalise' our original codeless certificates, now it would appear the French government is also failing to deliver,” he told The Connexion.

“We went to a restaurant yesterday and we had to go through the whole thing of getting out our paper certificates and explaining that they were Scottish vaccination certificates.

“It was fine, but we shouldn't have to do that if there is a system in place to get a French QR code.

“We feel like second-class citizens having to explain why there is no QR code,” he said.

Rosie Playfair, also from Scotland, recently spent a week on holiday in Nice.

She said that she applied for a French health pass QR code “weeks” before her trip, and followed up again the day before travelling to Nice on August 21.

She never received the code, and instead had to take three Covid-19 tests at €29 each to go to restaurants and other places where a health pass is required.

“I am glad I wasn't there for two weeks,” Ms Playfair said.

“I'm still waiting to see how long the French government will take to send me my pass - if ever.

“I had plans to go back to France next month but I am reluctant to go through all that again,” she said.

France’s ministry for foreign affairs has not yet responded to The Connexion’s queries about these delays, despite several requests sent since August 14.

A spokeswoman stated today (September 1) that the ministry was “looking into the matter” and would provide responses “as soon as is possible”.