Hundreds of trees stolen from private woods in south France 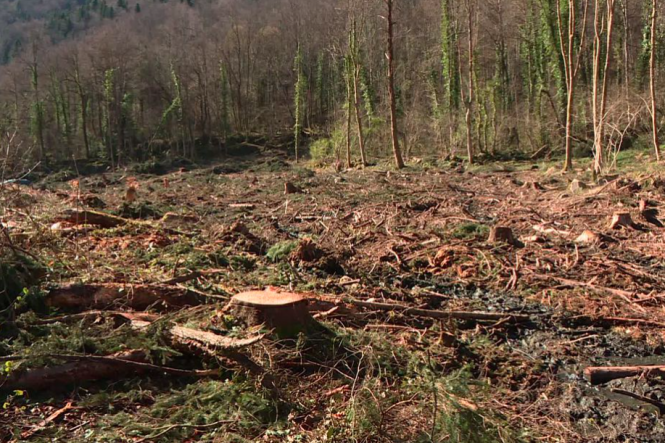 Twelve landowners have filed complaints after oak trees and conifers were cut down and the trunks removed from their properties in Occitanie.

Hundreds of trees were chopped down and removed from wild woodland around the village of Perles-et-Castelet in Ariège, near the French border with Spain and Andorra, in February.

Similar incidents have also been reported in nearby communes including Orgeix, Le Pla, Le Bousquet and Marsa.

The incidents have been traced to a sawmill in Lleida, Catalonia, north east Spain, after police tracked licence plate numbers of vehicles on plots of land where trees were being removed.

Mayor of Perles-et-Castelet, Gérard Durand, was also able to contact the sawmill, and save some of the trees after he visited a woodland site where workers were in the process of cutting them down.

He told newspaper Le Figaro: ““The workers told us that they made a mistake over which plots to cut down trees.

“I was able to speak to their boss in Lleida in Spain, David Bautista, and the workers stopped what they were doing and left.”

Mr Bautista did not comment on the incident when contacted by Le Figaro.

Others have not been so lucky.

Retired locals Yves and Hélène Rameil alerted police to issues on their plot of land at the end of February.

Ms Rameil told Le Figaro: “It was February 25 or 27, and we had been hearing the sound of chainsaws for a few days.”

When she and her husband went to look at their patch of land in the forest they found five woodcutters cutting down their oak trees.

She said: “We asked them to stop straight away, and they replied in broken French that they were following orders from their boss.”

When Mr and Mrs Rameil returned to their plot the following day, they found that wood which had been cut down from their land had been removed.

Danielle Segato, a retiree originally from Toulouse who also had trees stolen, told Le Figaro that the workers used the 18:00 curfew in place at the time to their advantage, to move out timber while landowners were confined at home.

She said: “They had a lot of equipment, which allowed them to cut up the trees very quickly, taking the trunks and leaving behind the treetops and branches.

“We’re talking about a very organised network – a forestry expert estimated that the amount of timber removed was equivalent to 35 logging-truck loads.”

Ms Segato said there was “nothing left” of her family’s plot now.

She said: “This was our corner of paradise, now everything has been cut down.

“It’s very cruel to have done that.”

Harvesting the health benefits of French birch sap in spring