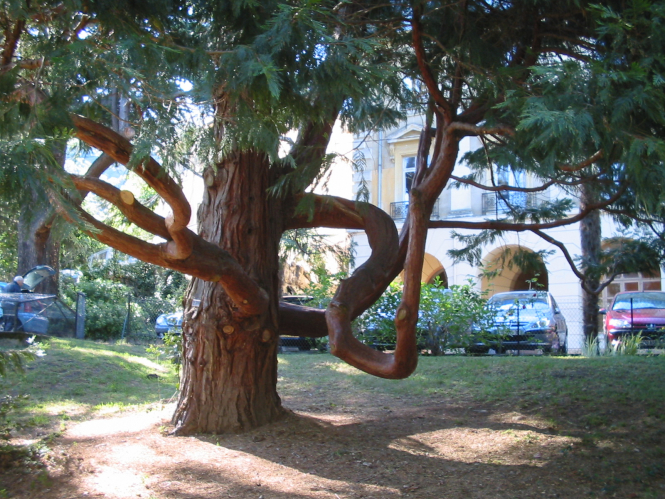 The first and only Village d’Arboretum in France is a unique collection of remarkable trees to be seen not in a majestic park, but by walking through the small thermal spa town of Vernet-les-Bains in the Pyrénees-Orientales.

The tourist office organises guided tours or you can wander alone and choose one of four circuits with details of the trees you will see along the way.

These include a 50 metre tall Sequoia, a magnificent magnolia grandiflora at least 130 years old, perhaps the finest example of a Tulip Tree in France and a vast variety of different conifers.

Roger Capela is President of the Association Village Arboretum de Vernet-les-Bains and says they have counted 2,500 trees and 350 different varieties of trees, bushes and creepers. The reason they are there are twofold:

“The first specimens were planted over a period of more than a hundred years from the end of the 18th century and right through the 19th century when it was the fashion to introduce exotic new trees from abroad.

'Vernet-les-Bains was a popular thermal town, particularly amongst the British aristocracy and it is thought they were responsible for planting many of the finest trees still growing here today'

“The sequoia, for example, is between 130 and 140 years old and dates from the time the first specimens were introduced into Europe from North America. Sadly, no-one ever noted down when the trees were planted, where they came from and who brought them to Vernet-les-Bains.

“In October 1940 there was a disaster, when terrible floods destroyed and carried away part of the thermal baths area, its luxury hotels and their gardens. Gradually the area was replanted with trees, which today also makes up part of the village arboretum.”

He says the large variety of trees has flourished because though Vernet-les-Bains is in the Pyrenees at 600m altitude, it has a micro-climate as the area is protected by the surrounding mountains.

This means that it is never very cold nor very hot, so that vegetation that would not exist in most mountainous areas can survive here. There are frosts and snow, so tropical plants might not survive, but the area can support a surprising range of plants.

Mr Capela says that no-one ever really noticed or appreciated the richness of the vegetation they were living in until the early 1990s when someone happened to mention the village had a remarkable collection of trees at the meeting of a local association Découvertes.

The members discussed this and contacted the primary school who took on the project for its two older class groups, CM1 and CM2 to go out and identify the trees. Over seven successive years, the children collected seeds, leaves, pieces of bark and made drawings which, with the help of their teachers led them to discover that they were indeed living amongst an extraordinary collection.

An association was created and continued the children’s work, and it took them 20 years to classify each tree. In 1996, the town council declared itself a Village Arboretum, a completely new concept.

To earn the label, they decided that the arboretum must be an integral part of the village and that the council would be responsible for the care of the trees and their replacement if they died. For a few years, a new tree was planted for every birth in Vernet-les-Bains.

The council now has a team dedicated to looking after the trees, who have gained specialist knowledge in the treatment of exotic species. Luckily there are not many pests or diseases.

Each tree has a number and there are explanatory panels in the village giving their names. Though the detailed stories of individual trees will never be known, some have developed their own local legends.

“Our magnificent magnolia has a very low branch which hangs about 40cm from the ground. For years, children have sat astride it and played horses on it so that it is called the Tree Horse.

“One winter there was an exceptionally heavy fall of snow which broke the branch. The mairie managed to save it by putting a support underneath. The Tulip Tree has truncated leaves, and if you look at it from the back we like to say it looks like the head of a cat.

“We then have what we call the Boxing Tree. This is the massive Sequoia, which has very spongy bark, 30cm deep and is fantastic for punching practise. It has had to be protected with a bar around it so nobody can do this anymore as it was getting damaged.”

One of the most extraordinary specimens, which seems to be unique to Vernet-les-Bains, is a Libocedrus decurrens or incense cedar originating from western North America. This particular tree has developed twisted and tortuous branches and no-one knows quite why this has happened and they have never found or heard of another like it.

You can pick up a plan of the four circuits at the Tourist Office. The Classique is between 1.5km and 2km depending on which route you take and includes the Giant sequoia, the Tulipier, the Magnolia Grandiflora and the twisted incense cedar as well as a Ginkgo Biloba or Maidenhair tree native to China.

Some of the trees are in private gardens and have to be looked at from a distance, but most are on public land and in parkland.

Mr Capela says it has taught villagers to always take note of the richness that is around them. You can live with an extraordinary collection of plants and never realise it, he says, as they did for years. He is sure there are other places with similar collections, particularly thermal spas like Vernet-les-Bains.

The rules of planting trees in your French garden