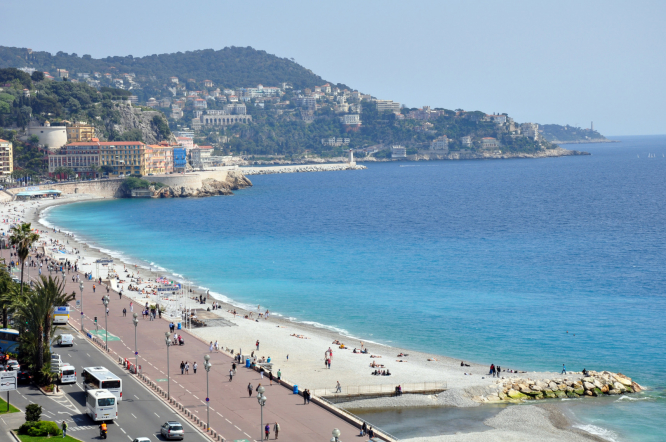 Nice, the capital of the Alpes-Maritimes department, has the highest number of reported Covid-19 cases of any city in metropolitan France. Picture was taken before Covid-19 pandemic.
By Connexion journalist

A weekend lockdown will be in place along the coastline of the Alpes-Maritimes for at least the next two weeks due to the high number of Covid-19 cases there. Covid: Lockdown next two weekends for French Riviera

The Alpes-Maritimes is the most affected department in France, but there is no consensus on why the number of Covid cases there is greater than in other parts of the country.

“At the departmental level, local specificities play a big role and it is very complicated to highlight causal effects,” Mr Alizon, who is also a research director at France’s national scientific research centre, told Franceinfo.

He added, “the increase observed in the Alpes-Maritimes is certainly multi-factorial”.

The incidence rate - the number of positive cases of Covid-19 recorded per 100,000 inhabitants - in Alpes-Maritimes is 583.

In the city of Nice, it stands at 735, the most of any city in metropolitan France. The national incidence rate is 201.7

We look at some of the possible reasons for why the Alpes-Maritimes is more badly affected than other areas.

Alpes-Maritimes prefect Bernard Gonzalez said yesterday (February 22) when announcing the weekend lockdown that the “attractiveness" of the department to tourists is one of the explanations.

The department recorded the third highest number of nights booked in hotels in 2019 in France after Paris and Seine-et-Marne, figures from France’s national statistics institute Insee show.

Tourists are drawn to the warm weather and beaches that dot the coastline.

Health Minister Olivier Véran visited the department on Saturday (February 20). He stated that tourism and warm weather could be playing a role.

“They come to enjoy the fresh air and they may have the feeling that they are safe by the shore. This is not true,” he said.

The two other departments in the southeast of France, Var and Bouches-du-Rhône, also have high incidence rates, of 307 and 331 respectively.

The mayor of Nice, Christian Estrosi had introduced a ban on holiday rentals in the city for the majority of February to try to stem the number of tourists coming to the city, but the ruling was overturned by an administrative court.

The court judge stated that there had not been any great influx of tourists to the Côte d’Azur, where Nice is located, and that holiday rentals were already following strict sanitary measures.

Alpes-Maritimes also sits on the border of Monaco and Italy.

Other border departments in France, such as Nord and Moselle, also have a comparatively high number of Covid-19 cases.

At the beginning of the year there were complaints that people from the Alpes-Maritimes department were travelling to Monaco in order to go to restaurants, which were still open there.

Monaco has since introduced stricter rules. Restaurants are now only open for lunch service and only to residents of Monaco or people working or staying there. There is also a 19:00 to 06:00 curfew in place.

Anyone travelling to France from Italy will need to show the results of a negative Covid-19 PCR test taken within 72 hours of departure.

Mr Alizon pre-published a study on February 17 on the presence of Covid-19 variants in France, such as the UK and the South Africa variants.

He told Franceinfo he believes the Alpes-Maritimes situation is linked to the spread of these variants, “which our work shows to be a priori more transmissible”.

However, in its latest Covid-19 update published February 19, Santé Publique France found that there were fewer reported cases of these variants in Alpes-Maritimes than in the Var and Bouches-du-Rhône.

Santé Publique France reported that nationwide, 36% of positive cases tested were found to be the UK variant, while 5% were either the South African or Brazilian variants.

The situation was already bad

Mr Alizon said that the department was one of the first to have an increase in hospitalisations in early January, following the end-of-year holidays.

Mr Alizon said that the curfew measures have helped, but it makes sense that the situation in Alpes-Maritimes is getting worse earlier than other areas as it was already badly affected after the New Year.