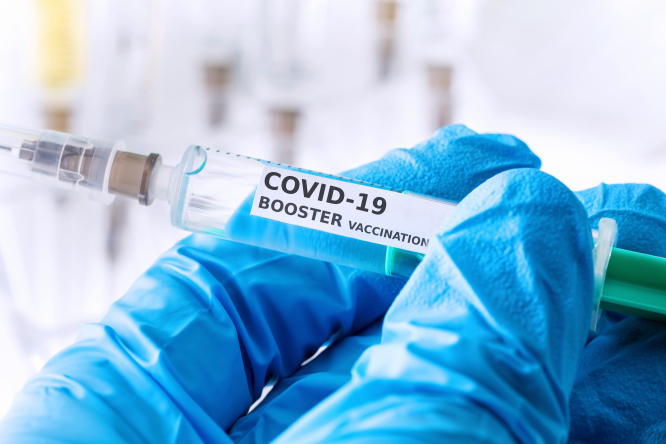 Booster injections against Covid for fully vaccinated vulnerable people, and those aged 65 and over, in France are set to begin in autumn. We answer key questions on how this will work.

France’s health service quality regulator Haute Autorité de santé (HAS) announced on August 24 that a third booster dose (dose de rappel in French) would be recommended for all people aged 65 and over, as well as people at risk of developing a severe form of the illness.

The booster doses are set to begin from autumn onwards.

How does the booster jab help?

The jab is intended to increase the level of protection against severe forms of Covid, as the immune response to the virus has been found to naturally decrease over time among those fully vaccinated.

Recent studies, including one published in the scientific journal Nature in June, show that this effect is especially likely in people aged 65 and over.

Another study in Nature showed that the immune response is also lower against the Delta variant.

Who is eligible for the jab?

Two major categories of the population.

Dominique Le Guludec, president of the HAS, told FranceInfo: “We anticipate at least 15 million people.”

The Health Ministry has calculated that in total, around 18 million people will be eligible for a booster dose, the AFP reported after a ministry press conference.

What vaccines will be used?

The HAS has recommended that only mRNA vaccines be used for the booster jabs. These are the Pfizer-BioNTech, and Moderna jabs.

This is because these vaccines are “very effective against severe forms of Covid, including those linked to the Delta variant”.

It will not matter which vaccine you received for your first and second jabs, even if it was the AstraZeneca or the single-dose Johnson & Johnson.

How long do you have to wait before getting the third jab?

The World Health Organisation (WHO) has called for a moratorium of at least two months on countries announcing third-dose campaigns, but despite this, several countries have already pressed ahead.

Hungary is the first European nation to begin offering third doses for its population, in a bid to stop the Delta variant from spreading further. Almost 180,000 people have already received a booster dose, on top of the nearly-60% of the Hungarian population that was already double-jabbed.

From September 20, the US is also set to offer a third dose to people who have already received the full Pfizer and Moderna jabs; while Israel is also now offering a third injection to people aged 40 and over, in a bid to stop the Delta variant. More than 60% of the Israeli population is double-jabbed.

France has confirmed that its third doses will begin in autumn.

Ms Le Guludec: “Between six and 12 months after the first vaccination is complete, a booster dose is important for people who are at risk of a severe form [of Covid].”

She said that the booster campaign was justified because of the “epidemic restart linked to the emergence of the more contagious Delta variant”.

France is still set to require people to wait six months before the date of their last injection, and having a booster shot - except for people who have had the single-dose Johnson & Johnson jab, who will have to wait just four weeks, the HAS said.

The government is pushing for the booster campaign to begin in September, but the HAS is suggesting that it not be offered until October.

Ms Le Guludec said: “There is no rush. The drop in the vaccination effectiveness is gradual and slow over time.”

The HAS is hoping that launching the campaign in October will allow it to roll out booster jabs at the same time as the annual ‘flu vaccination campaign, to kill two birds with one stone.

“The idea is to avoid people having to travel twice to get vaccinated, and enable them to benefit from both vaccinations at the same time,” Ms Le Guludec said.

France must also wait for approval from the European Medicines Agency (EMA) to proceed.

Will the rest of the population require a third jab too?

The HAS has said that this does not appear necessary for now.

However, it has also said that a booster jab for other categories of people “will probably become necessary in the coming months”.

And Professor Jean-François Delfraissy, president of government advisory body le Conseil scientifique, has this week also said that a third dose will likely be extended to a greater proportion of the population eventually.

He told TeleMatin: “If you want my personal opinion, I think we will go for a third dose for a large percentage of the vaccinated population. To stimulate the immune response. And if we end up with another variant, we can now make other vaccines, specifically targeted at this variant or that.”