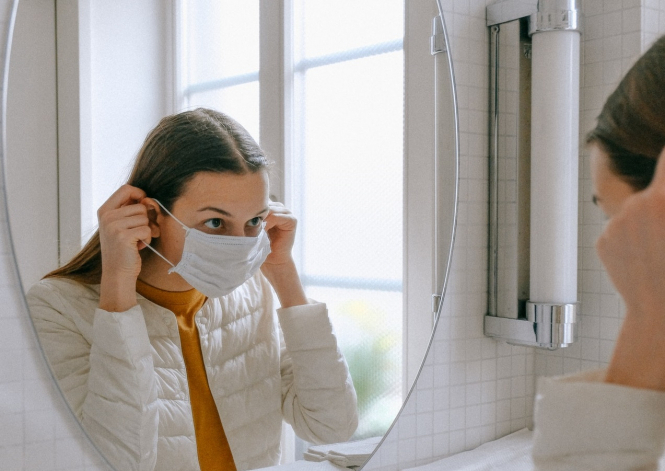 Masks should be mandatory in all indoor closed spaces, doctors in France have said in a new open letter
By Connexion journalist

In an open letter published in newspaper Le Parisien on Saturday July 11, the health professionals said: “We now know that barrier methods [such as physical distancing and wearing masks] are effective preventative methods. Wearing a mask is an important condition to limit the spread of the virus...Wearing a mask is not only to protect yourself, but also to prevent the spread of the virus; as long as everyone wears it!

“If you don't do it for yourself, do it for your older parents, hypertensive siblings or frail relatives, for whom the virus could be fatal. Let's not quickly forget that we have probably lived through - and are still going through - the greatest health catastrophe of this century.

“Unfortunately, the virus has not forgotten about us, and is still looking to spread everywhere that it can.

“The first wave of Covid-19 has passed, with all the human, economic and social consequences that we are seeing. For all of us, there is a big and understandable temptation to get back to normal life, to forget the virus, to enjoy the summer, the beach, nights out with friends and renewed proximity.”

It reiterated that “more than half of the inhabitants on the planet were confined not long ago, and more than 500,000 people died worldwide, of which 30,000 were in France”.

The letter continued: “In France, the indicators are still mostly ‘green’, but small signs [of a second wave] are starting to appear and should alert us to a possibly-massive restart of the [virus] spread.”

They said: “At this stage we must act to avoid a new, massive and deadly wave. When clusters are more frequent and uncontrollable, it will be too late to avoid a second near-total confinement.

“We must prepare for the second wave today. As doctors, we will be by your side to deal with it, as we were during the first wave, but we do not want to count as many deaths as we had to.”

Virus continuing to spread in France

The open letter comes as France reaches the threshold of 30,000 people dead from Covid-19, and authorities continue to call for people to stay alert to the possibility of a “second wave”.

At the last update, 30,004 people have died in total since the start of the epidemic, but today there are 7,062 people in hospital linked to the condition, fewer than 500 people are in intensive care.

On July 10, health authority Santé Publique France (SPF) warned that there was a “new trend towards a rise in the spread of the SARS-Cov-2 virus” in France.

The warning comes as the “R” number - the number of people affected per person, on average - rose slightly above 1 over the past few weeks. If the number is less than 1, the epidemic is receding. If it is at 2 or over, then it is continuing to spread and cases are increasing.

Sophie Vaux, from SPF, said: “Last week, on the mainland, the R was at 1.05, slightly higher than 1, and on the rise compared to the previous week, which suggests a trend towards a rise in the spread of the virus.”

On Thursday July 9, epidemiologist Dominique Costagliola told news site The Conversation: “Today, it seems as though we are back to the situation [we saw] in January, where the virus was already circulating at a low level in France in some areas.”

The letter comes as new Prime Minister Jean Castex this week said: “I have asked everyone to wear a mask more and more to protect us as best as possible from a possible second wave of the epidemic, about which I have no information, either official or hidden. But the best way to fight it is to prevent it.”

Health minister Olivier Véran reiterated: “People living in France want a holiday, and want to forget everything they've been through during these months [but] there is one thing they must not forget, and that is barrier methods.”

The open letter and statements come as senior health advisor to the government, Professor Jean-François Delfraissy, warned that the public was beginning to “abandon” health precautions as deconfinement and summer continue.

Deconfinement continues in France as the state of health emergency ended on Friday July 10.

Top doctor: French are 'abandoning' Covid-19 protections
French state of health emergency: What changes as it ends?
Covid-19 now ‘under control’ in France: Top scientist
Covid-19 second wave 'not on horizon' in France
‘Real risk’ of second wave of Covid-19