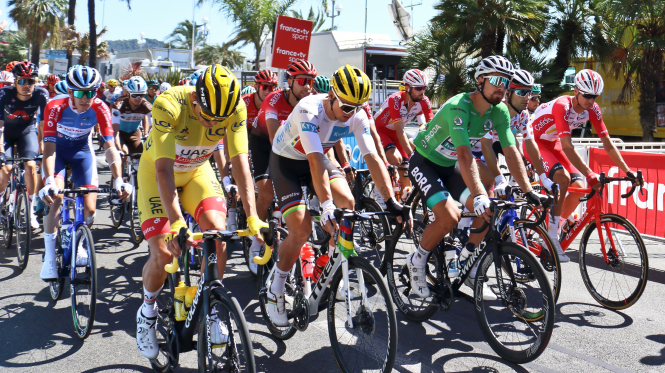 The woman who held the infamous “Allez Opi-Omi” sign in front of the Tour de France peloton is likely to receive a four-month suspended prison sentence Pic: Minnitre / Shutterstock

The Breton woman who caused a rider pile-up at this year’s Tour de France is expected to receive a four-month suspended sentence for ‘involuntary injury’ and ‘putting others’ lives in danger’.

The 31-year-old woman from Finistère shot to infamy in June after she was pictured holding a homemade, cardboard sign reading “Allez Opi-Omi” slightly too far into the peloton path of the first stage of the famous cycling race.

The cyclists were unable to avoid the sign, causing several to crash, which led to the biggest pile-up in Tour de France history. Nine cyclists suffered considerable injury, including Jasha Sütterlin, who was forced to abandon the race.

Now, the woman – who has no previous convictions – has been charged, and her actions judged to have lacked ‘an obligation of safety and care’.

Her lawyer had argued for the proceedings to be private, due to his client’s ‘psychological fragility’ and the risk of ‘lynching on social media’.

Yet, this request was denied after the court argued for the “strong principle of public debate, and international cycling group l’Union Nationale des Cyclistes Professionnels said that the case could have “educational virtue”.

The woman appeared scared and contrite in court.

She said that she had left the race in “shock” after the crash, and when asked in court if “she knew that she should have stayed” after the incident, she said, simply, “no”, and admitted that her actions had been “an error”.

She added that she “loves sport” and simply wanted to send a cheerful message to her grandparents, who are cycling fans.

She stated: “I never wanted to injure people. Normally, I’m a quiet person, and here, I’ve caused trouble, injured racers; scared lots of people. It was really, absolutely not intentional. I know that I will serve as an example, of exactly what not to do.”

She said she had delayed handing herself into police after the furore as for two days she had been “frozen with shame”.

Civil lawyer Mr Palao asked for just one euro in damages and interest, citing that the case should be ‘educational’, “so that the same thing never happens again”.

He admitted that “perhaps in the media, things went too far, but the facts are here”.

He stated that the woman had acted recklessly, had not paid enough attention to the “cars and motorbikes” that always pass on the race before the peloton, and had not stopped to help despite having caused and witnessed the collision.

Public prosecutor Solenn Briand requested a four-month suspended prison sentence, to serve as a “warning punishment”, and taking into account the woman’s contrition and her voluntary surrendering to authorities.

But defence lawyer Mr Bradmetz condemned the “media circus” around the case, and said that he felt the public proceedings were “extremely regrettable”. This included his client being kept in custody for 44 hours, only the first half of which was necessary for the inquiry, he said.

He said that the woman had “cut herself off from everything, no longer wants to read the news; and social media isn’t even worth talking about”. Her “social punishment...is still continuing”, he said.

The final judgement is expected for December 9.

Tour de France 2022 route revealed: will it pass near you in France?