Flying taxis could be in the Paris skies by 2024 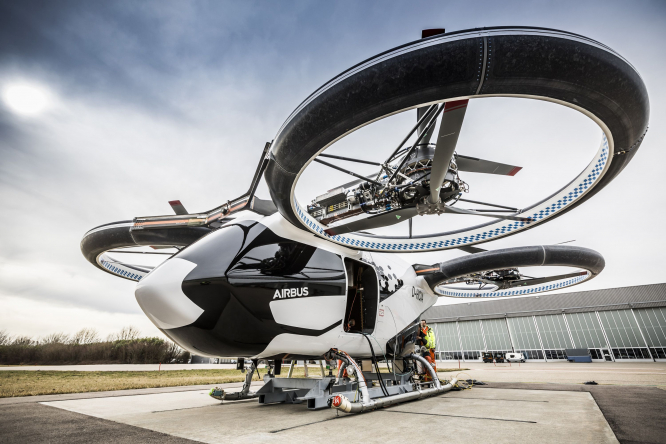 By the time the flame is lit at the 2024 Olympic Games, we can expect to see flying taxis in the skies over host city Paris.

At the recent launch of its CityAirbus concept, Airbus said it plans to be able to offer airborne links between Roissy-Disneyland Paris or Roissy-Saint-Denis. From 2030, it hopes to serve other economic and tourist centres in Ile-de-France, such as La Défense or Versailles.

The machine, with a flying time of 15 minutes, should have the capacity to transport four passengers at up to 120kph

The first commercial flights will employ a pilot to allow the machines to enter into the market until regulations and air traffic control systems have adapted to larger autonomous vehicles.

It seems the French are increasingly willing to try out new forms of automated transport.

A study by Carvea Consulting and Opinea found that 43% of those polled were willing to board a pilotless drone taxi. This desire increased to 51% among men and was even stronger among younger people, at 54%.

In total, “one in two people is ready to make a trip between predefined stations or a freely predefined trip on a smartphone. But also to go downtown or to the airport,” the study found.

Drones, as a whole, are seen positively, according to the study, which found that 68% of those polled accepted their use for survey large areas, such as agricultural or construction sites.

Until it sold its drone taxi operation in December, Uber was working on a similar model for several years in association with car manufacturer Hyundai. It had said that it would launch a fleet of five-seater flying vehicles as early as 2023.

In the end, however, price may be the biggest issue. Financial news website Boursorama predicted each journey could cost around €300 which – given the transport options available in large cities such as Paris – would price it out of the popular market.

In the air traffic control tower: 'Every hour is different'