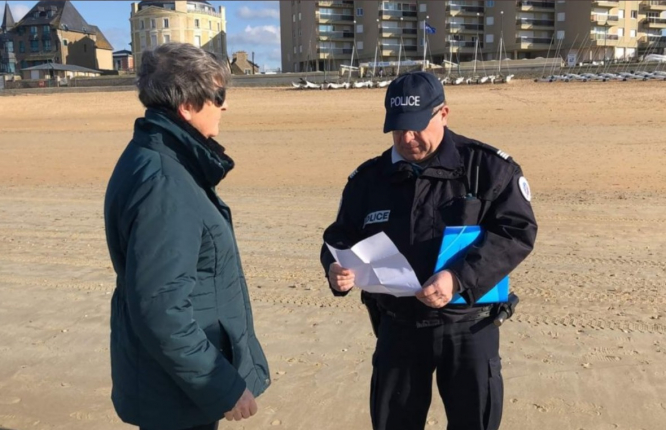 On Thursday (March 19), the third day of confinement, police reported that five people had been arrested and taken into police custody for not respecting the confinement rules, in Seine-Saint-Denis (Île-de-France) and Pas-de-Calais (Hauts-de-France), said newspaper Le Parisien.

All of the suspects were taken into custody after having been given several fines for leaving their house without good cause.

In Seine-Saint-Denis, authorities have imposed these extra-strict penalties on those who breach the rules, after reports suggested that many people in the area were not complying.

More than 1,300 formal police fines have been handed out in the area since confinement began, and on Wednesday alone (March 18), the number of fines given in the area represented 10% of the total issued across the entire country.

Some people were arrested for “outrage and rebellion” at checkpoints, and one person was immediately summoned to court for having allegedly bitten a police officer. Others were formally warned and fined after insulting officers, or spitting at them.

Now, those who are found to repeatedly not comply risk being placed in police custody for “endangering the lives of others”, which is punishable by up to a year in prison and a fine of €15,000, said the Bobigny prosecutor and Seine-Saint-Denis prefecture.

This is a far more strict punishment than the current fine of €135 per infraction (rising to €375 if not paid within 40 days).

Authorities in Seine-Saint-Denis said: “We were fumbling around, so we wanted to try a greater deterrent. The French need to understand the emergency health situation that we find ourselves in.”

The Bobigny magistrate said: “[To arrest people], you need to prove that the suspect has deliberately violated a given safety rule imposed by law. The four people in custody in Seine-Saint-Denis were all arrested for being too close to people they could potentially contaminate.

“It’s impossible to know if someone is ill, so there is a risk.”

More than 100,000 police and gendarmerie were called in at the start of the confinement period, to ensure that the rules would be respected.

Currently, the public must stay at home, and are only allowed outside for a small number of “unavoidable reasons” as listed on the declaration form necessary for each trip. Police checkpoints are in place on major roads and pedestrian streets.

There appears to be cautious support for the new, tougher punishments, especially in the case of people deliberately and intentionally flouting the rules.

Céline Parisot, president of magistrate union l'Union Syndicale des Magistrats (USM), said: “The prevention messages [of confinement] have been very clear for several days, and cannot be ignored. When you move around, deliberating violating a rule, then that is intentional.”

The news comes as President Macron called for people to take the rules more seriously, and said that the confinement period was very likely to be extended beyond two weeks.

He said: “People must respect the rules. When I see people going to the park, meeting up, going to the beach or lingering in markets, they show that they have not got the message.

"Many people are not taking this seriously enough. They don’t realise that this is to protect them and their loved ones.”

The President is to hold a new meeting of the defence council on coronavirus today (Friday March 20), to discuss the question of whether to extend the confinement period.

He said: “It depends on the curve of the epidemic [and] the number of new cases. I think we should start with six weeks, something like that, I cannot say exactly. But it will be longer than 15 days, it will be around six weeks probably, perhaps more.”