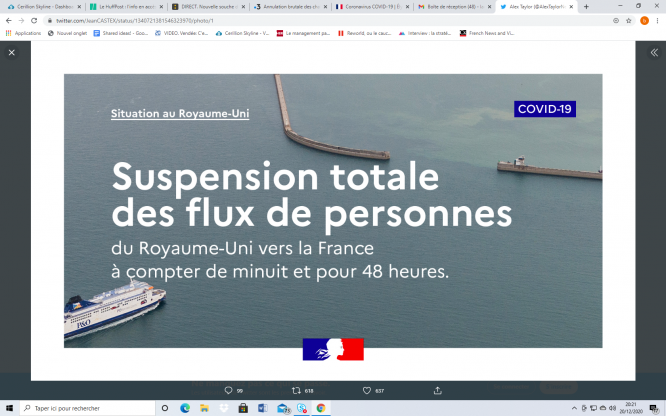 France has suspended all travel with the United Kingdom for 48 hours, from midnight on Sunday, December 20, in a bid to prevent a new variant of coronavirus that is spreading rapidly in the UK, from crossing to France.

The ban is expected to affect the travel plans of up to 50,000 French nationals living in the UK who had planned to return to France for Christmas. As well as flights, cross-Channel rail and ferry services have been halted, and the port of Dover was closed on Monday.

In a statement, the French government said that all travel from the UK has been halted, 'including the transport of goods, by road, air, sea or rail', to allow a co-ordinated European response to the mutation of the virus in the UK.

The UK's Transport Secretary,Grant Shapps, urged the public and hauliers not to travel to ports in Kent, saying "significant disruption" was likely after police mobilised Operation Stack - a system to park lorries on the M20 motorway in Kent at times of disruption.

On Sunday, drivers on the French side queued for hours to get back to the UK, with additional police security checks for migrants causing major tailbacks.

The 48-hour deadline should make it possible to pursue two objectives, the statement added: "To open up a time of coordination between the Member States of the European Union in order to define a common doctrine on the regulation and control of flows from the United Kingdom" and also to "prepare a secure reopening of travel from the United Kingdom from December 22, which will be based on a mandatory test device on departure".

"These 48 hours will help us build a system that will protect our country and allow French people in the UK to be able to reunited with their families here for the holidays. I'm telling them: 'Get a PCR test as soon as you can'," government spokesman Gabriel Attal announced.

As well as France, Ireland, Netherlands, Germany, and Italy suspended flights from the UK. They have been joined by eastern European nations Bulgaria, Romania, Lithuania, Latvia, Estonia, and the Czech Republic. Both the UK and European governments are holding crisis talks on Monday.

A PCR or antigen test is expected to be demanded of anyone coming to France from the UK when travel is allowed to resume.

Transport Minister Jean-Baptiste Djebbari announced that he will define the rules which will govern travel and transport on Monday, December 21. He said the decision will be made in conjunction with European leaders.

The travel ban follows the emergence of a new variant of coronavirus in the UK which Health Minister Matt Hancock has said is "out of control."

Meanwhile, the World Health Organization (WHO) has said it is in “close contact” with UK officials over the virus change.

The new variant is spreading more quickly than the original version but is not thought to be more deadly.

As well as the UK, the same mutation of the Covid-19 virus has also been detected in the Netherlands, Denmark and Australia. There is no evidence to suggest it reacts differently to vaccines.

On Saturday, UK Prime Minister Boris Johnson cancelled the Christmas plans of millions, instigating a strict new, tier 4, system across London and the South East to tackle the rapidly-spreading virus. Tier 4 allows only limited reasons to leave the home.

Canada suspended entry of all passenger flights from the UK for 72 hours. Passengers who arrived in Canada from the UK on Sunday would be "subject to secondary screening and enhanced measures, including increased scrutiny of quarantine plans", it said.

Meanwhile, Saudi Arabia has suspended all international flights for one week because of the pandemic.