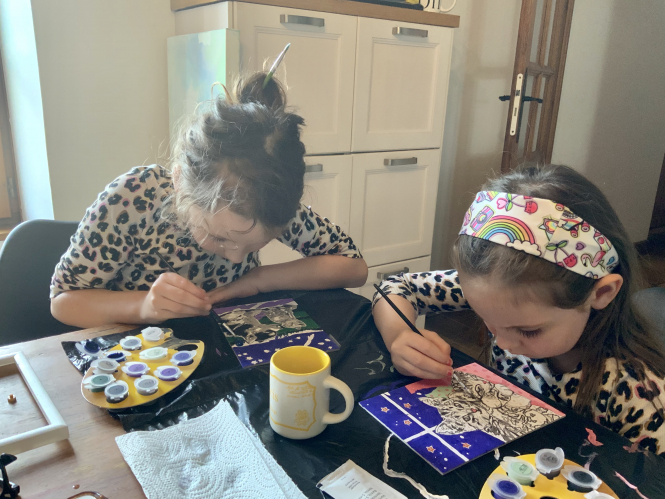 Arabella and Beau Batholomew-Oates are currently home-schooled by their parents in France, who now intend to move back to the UK due to France's ban on home-schooling.
By Jane Hanks

Two readers have told The Connexion that French President Emmanuel Macron's announcement to ban home-schooling means they and their families have decided to move back to the UK.

In a recent speech paving the way for a new law on anti-separatism, Mr Macron said that from September 2021, instruction at school will be made obligatory for everyone from age three years.

Instruction at home will be strictly limited to health reasons.

Currently, education is obligatory for all children, but not attendance at school.

Their first child, Arabella, who is now eight, began at the local primary school, but she did not settle down and was diagnosed as autistic.

The head teacher agreed education at home was the best option. The couple’s second daughter, Beau, six years old, is also autistic so she has never been to school.

“When I read news of the announcement I was shaking,” said Jodie Bartholomew-Oates. “It is horrible.

"There is a possibility the French government might allow us continue home-schooling for health reasons, but that is only a might, they have not yet decided what will constitute a health reason, and we cannot bear to cope with any more uncertainty about the girls’ future.

“We had already decided to move back to the UK when we could because special needs provision here is so bad, but now we have to do so as soon as possible,” she said.

Mrs Batholomew-Oates says it has not been easy home-schooling in France: “I have dreaded every annual obligatory visit from the school inspector because he seems to make it as difficult as possible for us.

"He did not like the fact that most of my teaching is in English. Communication is difficult for autistic children, so teaching in a different language is not easy, but I did comply. Afterwards, we learned we have a perfect right to teach in English and I do give them French lessons as well.”

She says home-schooling is not something you do for fun.

“It is no small undertaking. You have to fit it in with any other business commitments, everyone is at home all the time and it is not always easy to keep on top of everything in the house and there are costs involved as you have to supply all your own materials.

"Anyone who home-schools is doing so because they are trying to do their best for their children.

"We will now do everything to get back to the UK as soon as possible, even if Dan has to stay in France a while longer to sell the business,” she said.

Another reader, Claire Yalden wrote in to say the proposed change in the law means her family will move back to the UK.

“We had just got our son happy with school by doing home education and now it means he'll have to go back into the French system.

"We are not prepared to do that. The French are quite strict with home-schooling anyway, we have to provide evidence of all the work we do, unlike the UK, so it seems unfair to ban it when there are probably so few doing it badly.

"We are not the only ones in the area either, there are plenty of people who home school.”

Mr Macron said in his speech about anti-separatism that 50,000 children are home-schooled and that every day education authority inspectors discover children who are totally outside the system and every week préfets close illegal schools, often administered by religious extremists.

“Confronted by these abuses which exclude thousands of children from education and citizenship, access to culture, our history, our values, the experience of otherness which is the heart of the Republican school, I have taken a decision: from September 2021, instruction at school will be made obligatory for everyone from age three years. Instruction at home will be strictly limited to health reasons,” he said.

The Connexion contacted the Ministry of Education who said details of the ban are yet to be discussed so it is not clear what “health reasons” will allow home-schooling. The proposed new anti-separatism law is likely to be debated in parliament at the beginning of 2021.

Read more about home-schooling in France: