Pfizer vaccine production to start in France this week 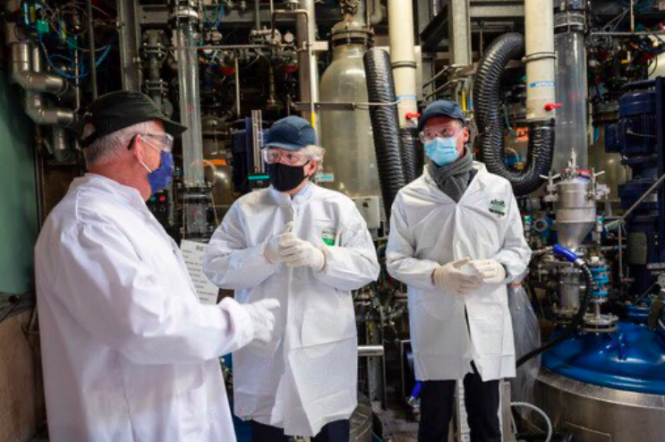 Production of the Pfizer vaccine on French soil will begin this week, with a factory in Normandy set to begin filling vials of the vaccine on April 7.

Parts of the Moderna vaccine production process will also begin in France by the end of this month, with the Johnson & Johnson and CureVac vaccines to follow soon after.

Overall, seven factories in France are expected to contribute to the production of 250 million vaccine doses by the end of the year.

Thierry Breton, European commissioner in charge of the vaccine task force, yesterday visited a factory near Dijon, which is already producing part of the Moderna vaccine

He said: “France is about to move into a stage of mass vaccine production.”

The factory that will start producing the Pfizer vaccine this week is run by Delpharm, a French subcontractor of Pfizer-BioNTech.

It will not make the active substance in the vaccine, but will be responsible for later stages of production.

Stéphane Lepeu, sales director at Delpharm, told Le Figaro: “Pfizer-BioNTech will send us the vaccine and we will be responsible for filling sterilised vials.

He said the factory in Saint-Rémy-sur-Avre (Eure-et-Loir) would be able to process “tens of millions of doses” by the end of 2021.

The factory has hired around 50 members of staff and spent €20 million on equipment for vaccine storage, with half of this funding coming from the state, the Journal du Dimanche reported.

It has brought millions of sterilised vials and stoppers, amid fears that there may be shortages in autumn as demand has skyrocketed around the globe.

As the vaccine needs to be stored at -70C, it has also bought large quantities of dry ice and ultra-low temperature freezers.

The Moderna vaccine will also be produced in France by the end of this month.

Swedish subcontractor Recipharm will begin production at a site in Indre-et-Loire (Centre-Val de Loire), after hiring around 60 people, and spending €2 million on storage containers and ultra-low temperature freezers.

And French pharmaceutical company Sanofi will soon produce and bottle the Janssen vaccine by Johnson & Johnson at a site in Marcy-l'Étoile near Lyon.

The factory expects to produce 12 million doses of the vaccine per month.

Other sites are expected to open in pharmaceutical company Favera’s factories in Pau (Nouvelle-Aquitaine), and Val-de-Reuil (Normandy) in June.

They will produce the CureVac vaccine, which has not yet been submitted for approval by the European Medicines Agency.

Europe to produce billions of doses by end of year

He said production at the site was now set to increase to become “two to three times faster”.

France does not yet have the technology to make each individual component of messenger RNA vaccines - instead factories in France will only take on some parts of the vaccine production process.

But Mr Thierry said that Europe as a whole will soon have the capacity to produce billions of vaccines.

He said: “From now to the end of the year, Europe will become the continent that is producing the most vaccines in the world, making up to three billion vaccine doses per year, as opposed to two billion in the US.”

In the second quarter of 2021, the EU aims to deliver 360 million doses of the vaccine to member states, with 54 million reserved for France.

France Covid vaccine schedule: When will I get my first dose?