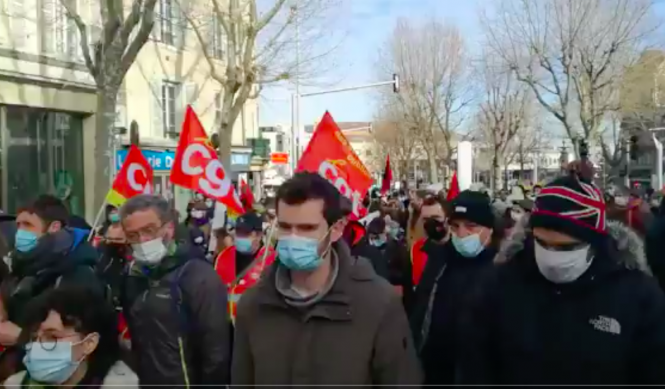 Protestors gathered this morning in Clermont-Ferrand, in the Auvergne-Rhône-Alpes region
By Jo York

Teachers, other school workers, and lycée and university students will join together in strikes today, starting at 13:00 in major French cities.

For school staff, strikes have been called by a collective of unions including the FSU, GCT and FO. Benoît Teste, secretary general of the FSU said during a press conference last week: “This is a crucial moment for education. There is a real anger rising among teachers, who are very worried."

In November 2020, the Education Ministry announced pay rises for young teachers in France from February 2021. But unions are now calling for wider pay rises in the sector, already promised during pension reforms last year, which they hope will bring long-term and substantial increases for all teachers.

Mr Teste said the pay rises suggested for young teachers by the Education Ministry were “absolutely not satisfactory”. He added: “Massive investment is needed to allow long-term recruitment and attract people to careers in education.”

Salaries for teachers in France are 7% below the average for early and mid-career professionals recorded around the world by the OECD (Organisation for Economic Co-operation and Development).

Calls for more protection in schools

In a statement, the union said: “In the difficult context of the worsening health crisis and uncertainty over a new reconfinement, 100,000 people will be on strike on Tuesday.”

The union has called for an emergency plan for schools and “real protection for teachers and students in order to keep schools open” during the health crisis.

It said: “Faced with an unprecedented crisis, which is threatening student success, front line workers feel abandoned. A response that is equal to the situation is necessary.”

Students to strike over university closures

Following their own strikes last week, students will also join teachers in strikes today to protest the lack of access they have had to their teachers through the health crisis.

She said: “We are continuing strikes to ask that students can go to class in person half of the time, and study online for the other half. Reconfinement or not, students need to see their teachers.”

Parents’ union and network FCPE (Fédération des Conseils de Parents d’Élèves) is also joining today's strikes on the grounds that the government should have “better anticipated the health crisis”.

Secretary General Saphia Guereschi said that asking school medical staff to carry out testing and tracing efforts in schools was detracting from their ability to care for students.

She said: “This has serious consequences: our young people, who are not doing well, can no longer be accommodated as they should be during consultations in schools…We must act quickly.”

In Paris, protests will begin near le Jardin du Luxembourg before moving towards rue de Grenelle, where the Education Ministry is based.