40 years of TGV: the train that changed the face of French rail travel 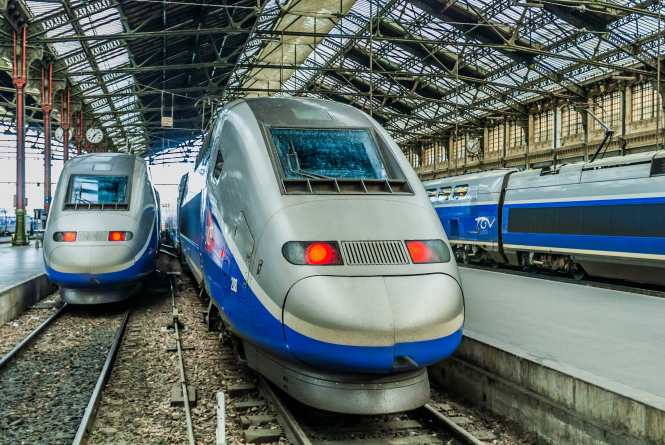 France is today celebrating the 40th anniversary of the launch of its high speed trains à grande vitesse (TGV).

On September 22, 1981, the first TGV was inaugurated at Paris’s Gare de Lyon, where President Emmanuel Macron will return today with ministers to unveil the “TGV of the future,” the TGV M.

At the beginning of his presidency, Mr Macron had announced that he would not work to launch any new TGV lines, in order to prioritise shorter distance daily transportation.

However, with reducing air travel becoming more of a priority, Prime Minister Jean Castex promised in April of this year to allocate nearly €6.5billion to creating new high-speed lines to complement the 2,700 km and 180 towns already covered.

This money will go towards developing TGV services between Bordeaux and Toulouse, Nice and Marseille and Montpellier and Béziers, with an extension to Perpignan. These lines will likely be put into operation between 2030 and 2035.

The Covid pandemic has caused a reduction in long-distance business travel, and the once profitable TGV network began to lose money for SNCF.

Some doubt that the introduction of new lines will help the situation.

“Economically, it does not make sense to create these new lines as there will not necessarily be enough customers to make money,” said Arnaud Aymé, specialist transport advisor in the consultancy firm Sia.

“Even the Paris to Bordeaux line which opened in 2017 and which shortens the journey to two hours is not profitable.”

SNCF’s problems are compounded by the competition that is entering the TGV market. Before the end of the year, Trenitalia will begin running between Milan and Paris’s Gare de Lyon, and Renfe has announced a Lyon-Marseille service for 2022.

Despite these challenges, recent weeks have proved positive for SNCF, as the number of people making long-distance journeys begins to climb once again after the constraints of the pandemic.

“No one will travel from Paris to Marseille for a staff meeting anymore,” said Alain Krakovitch, director of Voyages SNCF. “But there are some small signs of an uptick in business travel.

“On a very business-oriented line like Paris-Lille, we have noticed an increase of 30% in traffic on some days of the week.”

To compete against the low prices of rivals such as Trenitalia, SNCF will also be offering cheaper fares through its Ouigo services, as well as its advantage card, launched in June.

40 years of the TGV train

TGV began life with an orange TGV 001 called Patrick, which was designed by French designer Jacques Cooper, who worked with Raymond Loewy and later at Alstom, the company that manufactured the first of these trains and which still produces them today.

Completed in 1978, TGV 001 could travel at more than 200 km/h and which would change the face of French train travel forever.

In February 2020, Patrick was repainted in its original orange colour and taken on a farewell tour across France before its retirement. It had travelled over 13.5million km, the equivalent of 335 trips around the world.

The TGV Atlantique followed on from 1988-1992, with Jacques Cooper still in charge of the exterior design.

At first, TGV trains – which did not have a restaurant car but rather a trolley refreshments service – were often criticised for being less comfortable than other European equivalents.

However, the first-class sections with their large armchair-like seats proved popular, as did the bar carriage which soon became a staple feature of most trains.

From 1990, the TGV TMST (Eurostar) trains began carrying passengers underneath the Channel between France and England. These trains were smaller, allowing them to run on British rails as well as French.

Then came the TGV PBKA, which travelled north to Brussels, Cologne and Amsterdam, reaching speeds of 320 km/h. This train was more aerodynamic than previous models and so would be used for future SNCF services.

It was after 2000 that TGVs were repainted with the blue and silver design that we see today. Work was also done to improve the trains’ comfort levels, with an interior layout created by designer Christian Lacroix adopted in 2005.

Today, you can take an SNCF TGV train from Paris to Bordeaux, Lille, Nantes, Montpellier, Marseille, Brest, Toulouse, Rennes, Grenoble and Biarritz, with various stops served along the way.

France has the fourth largest high-speed rail network in the world, behind China, Japan and Spain. Its tracks cover around 2,700 km.

Currently, when you see a TGV running between Lyon and the Côte d'Azur, it will most likely be a TGV Duplex, which can accommodate 600 passengers.

SNCF predicts that by this year, TGV trains will have transported three billion passengers to destinations around France and elsewhere in Europe.

The future of TGV

The arrival of the new TGV M model was announced in May 2021 and will be supplied by Alstom between 2024 and 2031, initially serving the southeast of France.

This train will be more adaptable, bringing with it the possibility of adjusting the number of carriages, changing a first-class carriage into second class and reconfiguring the interior by adding or taking away seats or baggage racks.

SNCF says that the TGV M will be more aerodynamic, resulting in a 20% energy saving. They will also have up to 20% more room, making space for 740 passengers as opposed to 600.

France’s health pass: the rules for TGVs and other train journeys

Rules tighten for ticket refunds and exchanges for trains in France