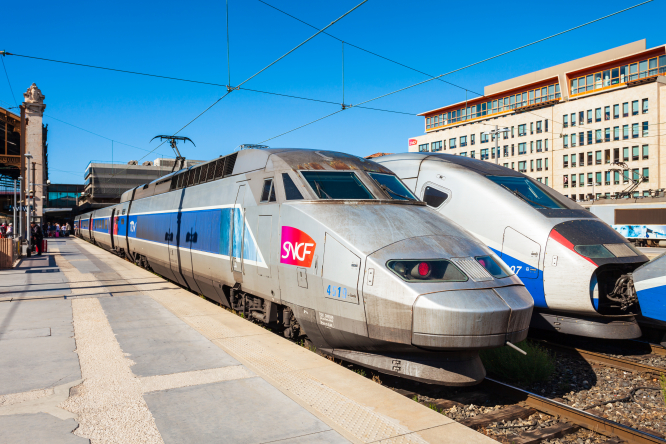 The Marseille-Nice train line has historically always been managed by SNCF, but authorities have voted to give the tender to Transdev as rail travel opens to competition Pic: saiko3p / Shutterstock

French train company SNCF looks set to lose a TER train line for the first time ever, after officials in the Provence-Alpes-Côte d’Azur region voted to offer the Marseille-Nice line to transport firm Transdev.

Officials in the Paca region first made the proposal on September 7, but the move will not be final unless it is approved in a final meeting on October 29.

The contract will last 10 years and is estimated to be worth €870million.

Transdev is a private French transport group, whose current set-up was created when Transdev and Veolia Transport merged in 2011. It currently carries 11 million passengers in France across buses, trains, and coaches.

The decision, if confirmed, will mark the first time that a route tender has been handed to a private company, and an operator outside of SNCF.

In a statement, SNCF Voyageurs responded: “SNCF Voyageurs [which includes TGV, TER, Intercités and Transilien] wishes the greatest success to Transdev, in the interests of travellers and the development of rail transport in the region.”

Christophe Fanichet, CEO of SNCF Voyageurs, said: “This choice marks the implementation of the opening to competition, for which we have been preparing for a long time, where our organising authorities have the freedom to choose other operators than us.”

The decision comes after three companies were in the running to take on the route, which runs through Toulon and carries 10% of rail traffic in the region.

Plans to double the number of return journeys

Transdev says its aim would be to “double traffic on the line” by 2025, passing from seven return journeys per day to 14, while keeping “prices equivalent”, it said.

Despite the decision to offer this contract to Transdev, the PACA region is still set to maintain SNCF management on routes such as Les Arcs-Draguignan and Vintimille (Italy), Nice-Tende, and Cannes-Grasse.

This second set of routes represents 23% of regional traffic, and the management contract is worth €1.5billion over 10 years. These routes are also set to increase the number of return journeys, from 69 daily now, to 120 over the next decade, the region said.

Work will begin on these routes in December 2024, and in July 2025 for the major route from Marseille-Toulon-Nice.

Leader of the Paca region, MP Renaud Muslier, said that opening train lines to SNCF competitors “will make it possible to improve services significantly for users”.

When the opening to competitors was launched in December 2019, Mr Muslier said: “We’re going to have amazing prices, offers by public or private, French or foreign, operators, who will respond to these calls for tender. We’re going to have trains on time, discounts, and a better quality of service.”

Philippe Tabarot, Alpes-Maritimes senator and former vice-president in charge of transport in the Paca region, who managed the case until June this year, told the Agence France-Presse: “This is historic in the world of rail travel.

“It’s the first time that a tender of this importance has been given to an operator other than SNCF.”

But Jean-Marie Valencia, communication head at union CGT-Cheminots Paca, said: “We are not surprised [at this decision]. It shows the willingness of the region to offer competition to the most profitable markets.”

Although he also called the decision “historic”, he added: “We are worried, because this will not be without cost to the cheminots (rail workers).”

And Didier Mathis, secretary-general of UNSA-Ferroviaire, the second-largest union at SNCF, said he did not welcome the move.

He said: "We are saddened by this decision because it will lead to the transfer of 166 agents [from SNCF to Transdev].

Four other French regions have also announced their intention to experiment with opening up their TER routes to competition: Grand-Est, Hauts-de-France, Ile-de-France, and Pays de la Loire.

8 hours ago
5
Map: in which French departments are Covid cases rising?