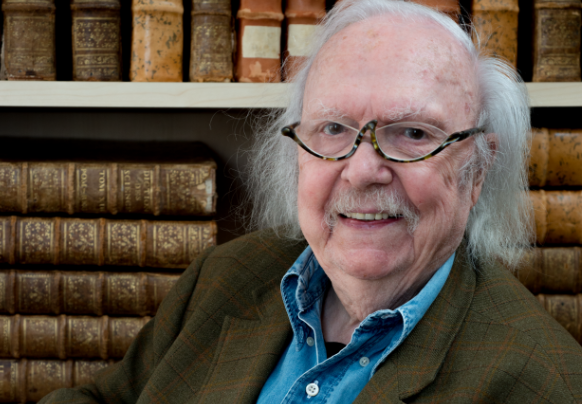 Alain Rey has died at the age of 92. He was well-known in France for his love of language
By Hannah Thompson

Famous French linguist Alain Rey, one of the major original creators of the iconic dictionary Le Robert, and known for his love of the French language and the ever-evolving nature of words, has died at the age of 92.

His death in Paris on Tuesday October 27 was confirmed by his wife and publishers les éditions Le Robert.

Mr Rey was part of the 1951 team brought together by the lawyer Paul Robert to create a new “alphabetical and analogical” French language dictionary. This led to the six-volume “Grand Robert” in 1964, and the “le Petit Robert” in 1967, as well as many other later iterations.

Mr Rey was born on August 30, 1928 in Pont-du-Château, Puy-de-Dôme, and met Mr Robert during his study of medieval art and letters.

Since childhood, Mr Rey had been “fascinated with words; their music and their image; their background and their strangeness; their richness, and the light that they project onto things and to beings”, said Le Robert on its website.

In an interview in 2015, Mr Rey said: “I don't try to push [the French language] around, I try to deepen it, and try to see it behind the things we use every day, the little mysteries hidden by centuries and centuries of use.”

While Mr Rey was known for being in favour of the language’s evolution - such as the feminisation of words such as “acteur (actor)” to “actrice (actress)” - he was also notably against what he called the “invasion of ‘Californianism’, a modern version of ‘anglicisation’”.

With humour, he often decried the use in French of words such as “spoiler” and “hashtag”, and worked to spread the French or Latin origins of the words, and their French equivalents.

Also in 2017, Mr Rey took part in a “rap game” with the freestyle rappers Bigflo and Oli, and the YouTuber Squeezie. He gave them a list of words from the Grand Robert of which “no-one knew the meaning”, and asked them to include them in their rap.

He even took part in a rap with the group, much to everyone's amusement.

He said: “I am happy to teach these young people these words that they didn’t know about, and once they have put them in their rap, the words come to life - because that’s the idea, it’s to stop words from dying, and for that, we have to make the words accessible, and to do that, rap is a good medium.”