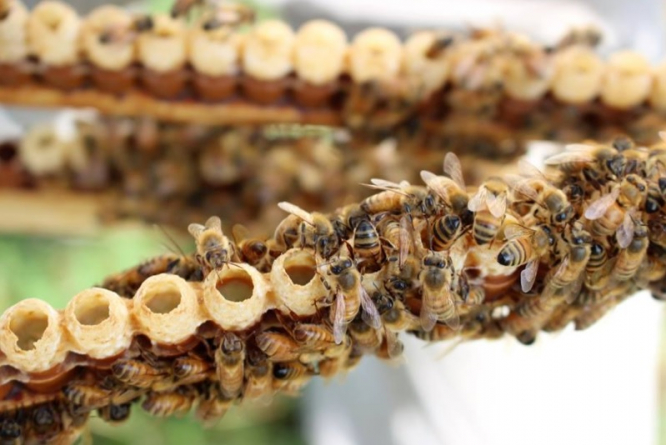 Residents have complained about bee pollen from the Pineau beekeeping farm, exasperating the local mayor
By Connexion journalist

Christophe Georges, mayor of the 320-inhabitant commune of Pignols (Puy-de-Dôme, ‎Auvergne-Rhône-Alpes) posted a frustrated account of the row on his Facebook page.

He said that he was “stunned” that some new residents had complained about increased bee "excrement" falling on their property, including on their garden tables, their shutters, and in their outdoor jacuzzi.

The residents were living close to a new beekeeper property, the mayor said - a property that he had supported in getting established in the area, and which is run by a local couple, Stéphanie and Dominique Pineau.

The couple set up the beekeeping business a few years ago, with a view to supporting the surrounding countryside and producing honey.

In his post, Mr Georges said: “I am tired of the mentality of certain residents. I supported the establishment of a beekeeping couple in my commune...and now inhabitants living near to the honeymaking [business] are complaining about bee excrement...which is, pure and simple, made up of pollen...the essence of life!”

He added: “Some have even complained that the bees are eating the fruit on their trees, when actually the only insects that eat fruit are wasps and other insects.

“We cannot tar all new inhabitants with the same brush, and I do not usually express my surprise [on such issues], but please share this message so that those who are responsible might question themselves a bit!”

He said: “Help me to support Dominique and Stéphanie Pineau, who are new beekeepers and who took the risk of quitting their [previous] jobs to create this agricultural activity.”

In response to the row, the Pineau couple posted on Facebook: “[We are] very sorry [for the issues], and only want to contribute positively to life in this pretty village, and certainly do not want to be a source of conflict. [These days] it has become very difficult to keep and live off beekeeping.”

They said that the bee droppings may have been more noticeable in recent weeks due to the “lack of rain”, and added that they were looking to build more hives on land further away from their property and local houses, to avoid more issues.

In a further statement, mayor Mr Georges said: “Today, we have some residents who arrive in our countryside, who only see the advantages, and later they realise that there are also some inconvenient [factors]. We must all have a bit of tolerance.”

The mayor is the latest in France to become frustrated with complaints of local residents, especially those who have moved to the countryside recently, or who are occasional holiday home visitors.

In recent years, rows have erupted between new inhabitants, holiday home owners and holidaymakers; and long-time residents, over countryside issues such as “too-loud church bells” and “too much” cockerel crowing.