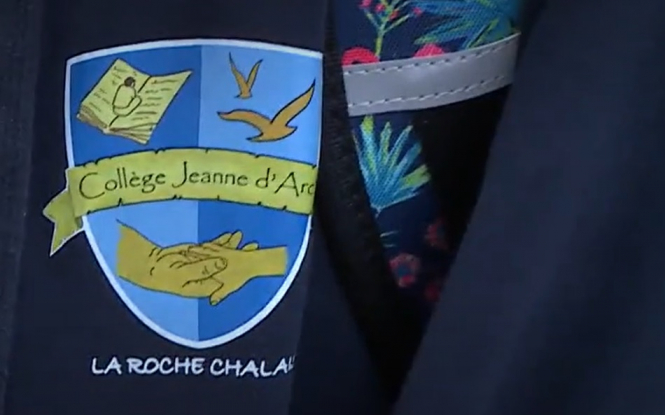 The school uniform has the school's crest and name on the front, and includes sweatshirts and T-shirts.
By Hannah Thompson

The private collège (pupils aged 11-18), Jeanne d'Arc in la Roche-Chalais, had been considering the move for the past two years, but finally introduced the rules from September this year.

Students must now wear the same T-shirts, polo shirts and sweatshirts. Each sweatshirt has the logo of the school printed on the front. Each student can still choose their own trousers, skirt or shoes - within reason.

The cost of the new uniform was €90 per student, paid for by their family. For the rest of the year, families will also be able to benefit from a clothing grant to go towards future purchases, and items will also be sold second-hand for less.

Headmistress Carole Faucheux said: “It stops people worrying about appearance, who has the most fashionable designer clothes. Among the teenagers, we said that if we could remove this problem of inequality, at least on the top, that would help with integration of some students.

“And also it helps to show that you can distinguish people by other things than their appearance.”

Parents and students appear to have cautiously welcomed the new uniform so far.

Speaking to news service FranceInfo, one parent said: “We don’t have to think too much about what they are going to wear. And the children are taking it well - at least, I think my son was happy.”

One student said: “Personally, I like it. Maybe not everyone does.”

The decision comes amid a furore that emerged in early September around acceptable school clothing. Several lycée pupils reported having been reprimanded for wearing “incorrect” clothing, such as mini-shorts, miniskirts, or crop tops that show the belly button.

As a result, National Education Minister Jean-Michel Blanquer invited students to “dress in a Republican manner”, a phrase that once again restarted the debate over uniforms and “appropriate” schoolwear.

On social media, users questioned the meaning of the phrase and some even mocked it. Some suggested that the debate was sexist, and that female students were far more likely to be asked to change clothes or reprimanded for their style than boys.

Others said that the debate showed that introducing school uniforms could be a good idea in France.

Currently, rules in France state that it is reasonable to ask students not to wear anything that could be distracting or cause issues. This includes low-cut tops, too-short shorts or skirts, anything with holes, obvious or graphic tattoos or piercings.

One female student told FranceInfo: “We don’t tell the boys they can’t wear jogging pants. So why do we, as girls, get told that we can’t [wear things]? It’s because people sexualise girls’ bodies.”

A male student appeared to agree, saying: “A crop top isn’t going to distract me. If I’m not concentrating in maths class it’s not because of the girl that’s in front of me.”

Raphaȅlle Rémy-Leleu, author of the book “Osez le feminisme!” (Dare to be feminist), said: “We ask girls to change their clothes but not boys. There is a real difference in the way that girls and boys are treated, and that means there is a lot of sexism that we are exposing them to [from when they are] very, very young.”

French people ‘giving up on the suit’ as sales plummet