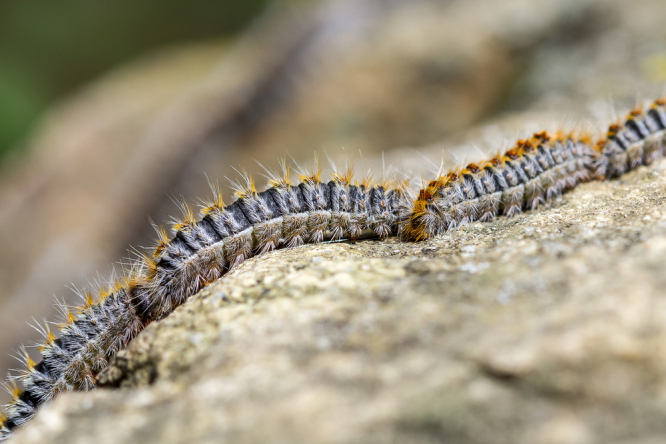 The insects are common in France from spring onwards and can cause significant damage to plants and trees Pic: Gonzalo Jara / Shutterstock

Authorities in Pau, Nouvelle-Aquitaine, have authorised the use of paintball guns to cure the city’s pine processionary caterpillar infestation.

The guns launch beeswax balls armed with sex pheromones into conifer trees where larvae are hatched.

When the balls hit the trunks, they release pheromones into the air which disorinentate the male butterflies, preventing them from being able to find females with which to mate.

The town has 1,500 conifers, all of which could host the insects if the butterflies were left to reproduce.

Antoine Gauthier, in charge of the tree service in Pau, told France 3 that pheromones were used strategically among the trees.

“To organise our operation, we have selected all sensitive sites, meaning all sites that are near areas for young children or anything to do with medicine,” he said.

Within these sites, all trees within a perimeter of 50 metres are treated with pheromones which limit moth reproduction by 80-90%.

The method is approved by the agricultural science institute the INRA.

But it requires specific weather conditions to be effective, including no rain for two or three days after the trees are treated as it could wash the treatment off.

Pine processionary caterpillars can pose health risks for people who are allergic to them, such as itching and even swelling under the skin.

Mr Gauthier said dogs with allergies were also at risk. “They tend to pick up caterpillars and that can cause necrosis on the tongue which can cause death.”

Keeping dogs and children away from resinous trees with needles that the caterpillars like to feed on is one solution.

The insects are common in France from spring onwards, and can also cause significant damage to plants and trees.

Nests full of eggs are visible in pine leaves as a white, cloud-like cluster. Once hatched, they often group together on tree trunks.

How to get rid of pine processionary caterpillars

To get rid of pine processionary caterpillars yourself you can destroy nests in autumn by cutting them down and burning them.

You can also attach a trap to tree trunks to catch the insects after they hatch and start to move down the tree.

In summer, professionals can also treat your trees with pheromones, as is being done in Pau.

If you see pine processionary caterpillars in your garden or local area you can also contact the mairie for more details on how to manage them.

Update: This article was updated on June 12 to state that Pau is located in Nouvelle-Aquitaine and not Occitanie.