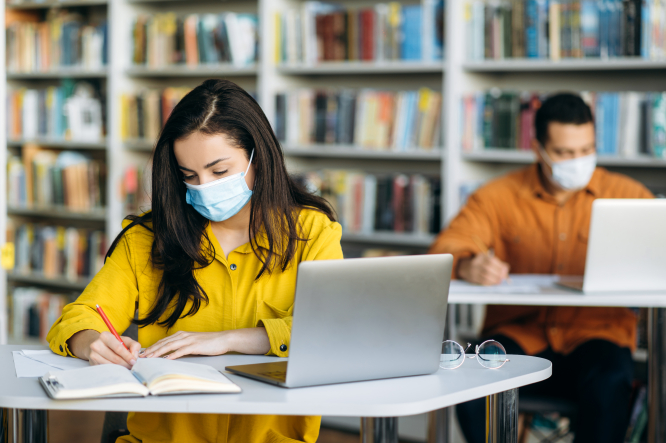 New rules state that lecture halls can be filled to capacity but barrier gestures such as mask wearing must be maintained Pic: Kate Kultsevych / Shutterstock

France’s 2.8million university students will study “100% in person” when higher education institutions reopen on September 13, it was revealed this week.

This comes after students in this age group have spent months learning online since the start of the health crisis.

But for la rentrée this year, the Minister for Higher Education Frédérique Vidal said there would be “no limits in lecture halls, meaning they can be filled to maximum capacity”.

This means that social distancing rules will not be applied, but barrier gestures such as mask wearing and airing out study rooms will still be in place.

Mr Vidal outlined other health protocols for the coming academic year in an interview with Le Parisien.

All main campuses will have a vaccination centre, possibly set up inside marquees, the minister said.

Students on smaller, satellite campuses will be given the option of making vaccine appointments at larger campuses, with vaccine centres expected to be operational from the first days of September.

On August 21, Mr Vidal praised the 18-24 age group on Twitter for its high vaccination rates, with 80% being partially vaccinated and 66% fully vaccinated.

He said his objective for la rentrée was that 80% of students would return to university fully vaccinated.

If three contact cases are identified in the same course group within seven days, unvaccinated students in the group will have to self-isolate and study from home for seven days.

Vaccinated students will still be able to attend courses in person.

As well as contact tracing measures, the minister said that 2.5million self-test kits had been distributed to universities for September to help quickly identify positive cases on campus.

He said the state would pay for more tests to be delivered in the coming months.

Health pass needed for some events

Students will not need to use health passes to attend classes at university, but they may be required for some events on campus.

Mr Vidal said this could apply to “parties organised by student groups, or university cultural and sports activities ­– that are not part of courses – organised in establishments that are accessible to the public”.

International students who are vaccinated will be able to attend university in-person, but those coming from red-zone countries must sign up with the Assurance maladie before arriving in France “so that they can be vaccinated as soon as they arrive”, Mr Vidal said.

Unvaccinated international students will have the same access to vaccines as unvaccinated French students.

A study conducted by student union FAGE over summer found that costs for university this September have risen by 1.32% compared with last year.

The study looks at factors such as rent, meals, transport, telephone and internet bills.

Mr Vidal said €3.3million would be mobilised to help students cover financial costs, with financial aid being put towards projects including €1 meal schemes and rent freezes.

University plans on hold as Brexit raises fees by €9,000