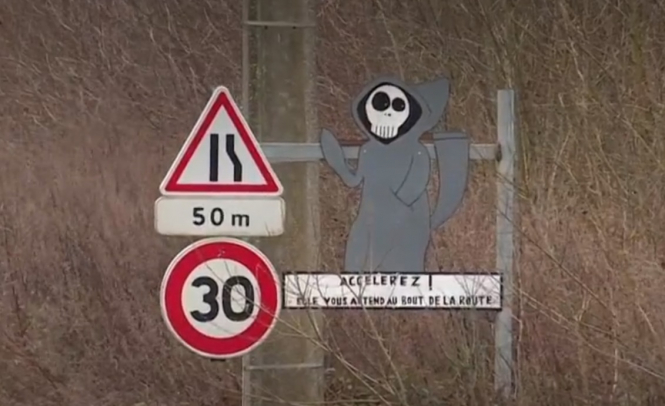 The new signs, which are positioned above or next to the normal speed limit signs, include cartoon drawings of a woman holding a smoking gun, warning drivers to “slow down or the mayor will get angry”; and one of the Grim Reaper with a skull in a hood, warning: “Accelerate...she [Death] is waiting for you at the end of the road”.

The road in question has become more dangerous in recent years, residents have said, with few drivers passing through the village respecting the 30kph speed limit. Several accidents have already happened as a result, especially at night, locals said, despite an increased police presence.

Mayor Mr Guillez explained the darkly-humorous signs to local news source France3, saying: “It’s humorous. It’s to try to slow people down...Because some vehicles come through here at 100, 100kph. You can see that [the warnings] aren’t that large.

Residents in the village have supported the move.

One man told France 3: “We have lived here for 14 years, and traffic levels just keep rising, as does the speed. It is astounding how many times I have been scared, coming out of the house.”

One woman said: “We are always scared. We have children who take the bus, and there are bus stops on each side, so they have to cross the road. Cars come through very quickly, trucks as well. Even though we are far from a 50kph [speed limit].”

One local driver, who has to pull out on to the road to drive to work everyday, said: “I always have to be careful. There are some who respect the 30kph limit but there aren’t many who do. If I want to keep going until retirement, I’ll have to keep watching out! It’s very dangerous.”

The humorous signs are only the first step in the mayor’s plans to make drivers slow down; in the coming months, a “smart” traffic light system is also set to be installed.